Lost in Spain - The Tale of Two Pairs of Sunglasses - Part 2.

If you haven't read Part 1 it is advisable to do so first!  Lost in Spain - The Tale of Two Pairs of Sunglasses - Part 1.

After two years and down one pair of sunglasses in February just the following month, not even four weeks later another tragedy occurred. The second pair of black glasses, the remaining identical twin befell a similar fate.


I was on a Press Trip at the most amazing private estate in Castilla-La Mancha, with its own international runway, where everything is possible and the service second to non. Having been happily perched on top of my head throughout the welcome and cheese tasting, surviving the photo-safari by Land Rover and the most amazing 'Out of Africa' spread for lunch, actually used as sunglasses, not hairband, on the second part of our 4x4 excursion, then to the top of a hill to see the sun set in the direction of home - Andalucia. 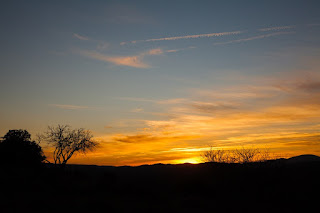 Obviously as the orange and aubergine sky darkened, blankets wrapped around us my sunglasses removed and as I was wearing the cap I'd been given for sun protection earlier, I couldn't put them on my head. So down somewhere they went. My cap blew off on a downward trail yet still I didn't think of my sunglasses. Not until the following day after a massage and breakfast and in need of darkening the light of day (after a short night and wine-filled evening) they were nowhere to be found. 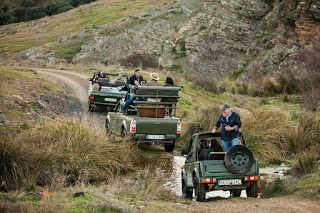 The Land Rovers were checked, my bedroom scoured, my memory didn't seem to be working very well and I could not recall my last handling of them. I was given a pair of safety-type sunglasses that are provided for the pheasant shoots. Not feeling my best or looking swagger with the wrap-around glasses all I could think of was somewhere in this vast estate lie a sad, solitary lost pair of sunglasses. My only consolation was as with their twin they were both now at rest in beautiful, unspoiled countryside, and there to the best of my knowledge they have stayed.

Time to go shopping and restock my supply.

Disclaimer: Being absolutely opposed to leaving litter, and being no great fan of plastic I would not  not have left them in the countryside if I could help it!