Lost in Spain - The Tale of Two Pairs of Sunglasses - Part 1, Ibiza

It all started two years ago. As a habitual loser of sunglasses, I once invested in three pairs at a time. One for each car and one for the side of my bed, or at least that's where they are often found, having taken them off the top of my head at bed time.

But let's start at the beginning. A shopping trip for our youngest as payment (read bribe) for helping with some building work led to me purchasing three pairs on one day. Three pairs because I liked them and they were cheap. Two identical black ones and one pair of (so I thought) stylish brown ones, which actually weren't as effective as sunglasses but very efficient for controlling the hair.

So as you can imagine it was the two black pairs which had more outings and adventures. Roll on two years, yes for two whole years I maintained, with one or two small blips, all three pairs. Never all together, never really being sure if I still had them all, but in their own various locations I'd kept them close-ish.


This February one black pair was lucky enough, or not, to accompany hubby and I to Ibiza. A three-night escape after finding cheap flights (33€ return for the two of us) we flew from Malaga on a short early morning flight to Ibiza, somewhere I'd been as a child but hubby never had. After much ribbing 'you'll be the oldest swingers in town' from my brother-in law we landed to stunning views and transparent azure seas.

The second party town Sant Antoni de Portmany on the opposite side of the island yet only twenty minutes drive from the airport was our hideway. In the evening we promenaded down the deserted sea front, enjoying the dead party town. Peace reigned and no swinging was required. The harbour and bars were empty. So far so good. My sunglasses were safe upon my head, until bed time.


Day two and we set off to explore the scenery which I have to admit is so much smaller and so much more attractive than my images of the 'party island.' Stunning little coves, rocky outcrops, sandy beaches all deserted, just for us. My sunglasses on eyes or head saw it all.

Away from the beautiful coastline the flattish interior with green fields scattered with yellow spring flowers and topped everywhere by confetti-pink almond trees in blossom, it was chocolate-box pretty everywhere. 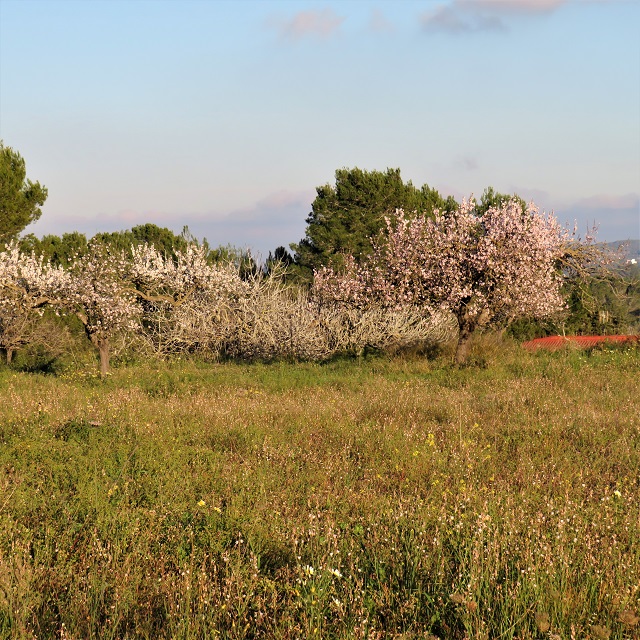 With sunglasses on head and camera in hand I waded through one field of yellow and green to take photos of the almond trees and the beautiful blossom. 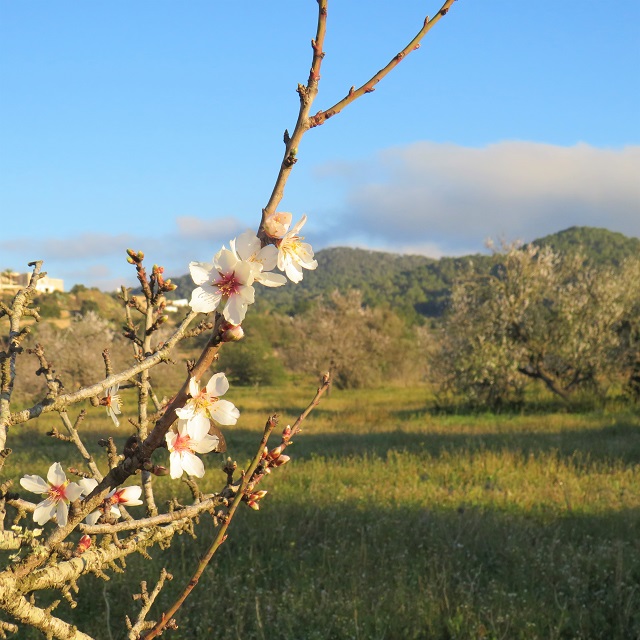 As I looked up, camera posed for a close-up shot the sunglasses rolled off my head. They went down my back and into the wilderness of calf-high growth. Despite my attempts to rescue them, they disappeared forever and I had to retreat sunglasses-less to the car. Too sad to want to replace them the rest of our trip was brighter and my hair more windswept than before.