Cordoba Flower Patios in the City and Province

The Cordoba patios are a riot of colour and architectural delights. Every May privately owned patios open their gates to visitors during the competition which is held for two weeks at the beginning of May after the May crosses festival. 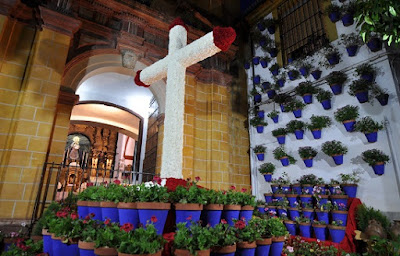 During these two weeks private patios, usually hidden from the passer-by are open for public viewing. Quite often the facade is bland but step through to the open central patio and a feast of colour and sensations, water features and beauty stops you in your tracks. Fragrance and an abundance of nature in the midst of the city, time and time again, each very different, all with their own magical charm.

The patio competition began in 1918 and has continued yearly, except for a break during the Civil War years,  ever since. The Cordoban architectural style is preserved in these privately owned houses with their ancient patios and the competition is one way which these treasures can be seen and appreciated by all. These interior communal patios from Roman and Moorish times featured, and many still do, the essence of water. The necessary well still exists in many as well as fountains as water features and cooling systems in the hot summer months.

If you can't visit in May there is a new iniciative called DePatios who organise visits to five prize-winning patios throughout the year. More information can be found on the website in Spanish, the prices and times are here plus you can book online 'Comprar Ticket' too.

Some patios also open over the Christmas period for guided routes, that is what I want to do this year. They will be very different in the dark, with lights and candles but without all the brightly coloured summer plants.

There is an  Interpretation Centre - Centro de Interpretacion de la Fiesta de los Patios Trueque Cuarto which opened in 2016 and has free entry, it's on Calle Trueque. If you arrive by AVE and show your ticket you will get a free Kit del Patios Cordobes - a little plant pot and geranium seeds. 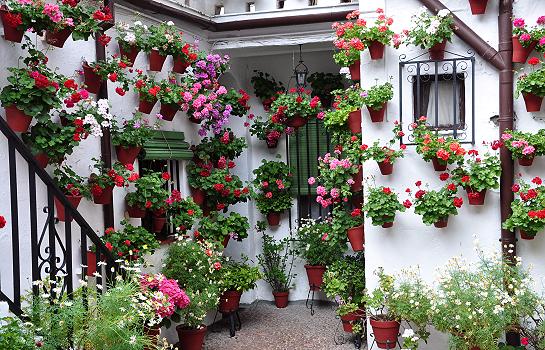 It isn't only in the city, now there is a competition throughout the province of Cordoba too. This year will be the V edition of the Concurso de Patios y Rincones de la Provincia de Cordoba. It takes places on the same dates and has prizes ranging from 150€ to 1,500€. There are three different categories and prizes in this competition: Patios, Corners (or little plazas) and window bars/balcony adornment. 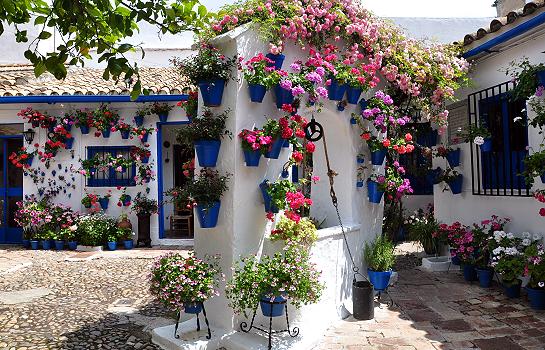 So if you live in the province of Cordoba get decorating but don't forget to apply (between 12 March and 15 April) otherwise you won't be judged! If you just want to visit the decorated houses there will be a list of the participants nearer the time.

I will be spotted wielding my camera around and about the different towns and the city itself in May.