My home, Jaen, in northern Andalucia is the land of olive groves, olive trees, the olive fruit and the fruit of the fruit – olive oil. This is Spain's biggest olive oil producing province and what incredible olive oil it produces. Every grove, every town, every factory that grows, harvests and produces that glorious liquid gold creates a masterpiece, a unique blend, just like wine, each one different in both colour and flavour. The early first-pressed 'green' oil is more like juice than oil.

Olive trees surrounds me, they surround our house (and our holiday home Casa El Reguelo above.) My bedroom window, at ground level outside, has olive trees next to it. From our front door and back door we have a sea of olive trees. From our patio, they march in straight lines to the horizon, up hill and down, an ocean of silvery green dots. Unsurprising, if you've been here, is that there are more olive trees than people in Spain. Jaen province alone has in excess of 66 million. They have their seasons but are always green, no winter loss and ugly bareness. In summer at times they glitter in the sun as the shiny, silver underside of leaf is turned to reflect that piercing sunshine and almost 40c heat. 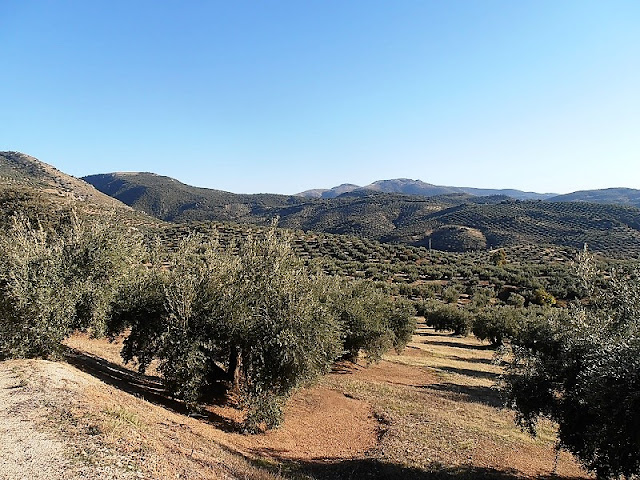 More than twenty years ago when I moved from England to Spain I didn't really like olive oil or use it at all. Now I can't imagine cooking without it and breakfasting without it. The traditional local breakfast is olive oil on toast with freshly grated tomatoes – how could I have spent more than half my life without discovering that. Often I eat it twice a day now. Like that for breakfast and adding some jamon and or cheese on top for supper. 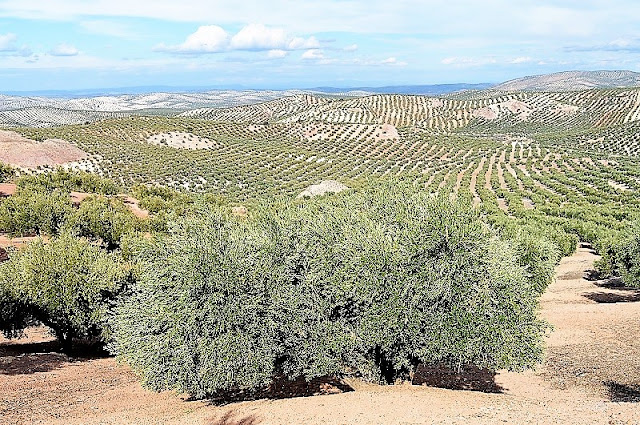 It was once the food of the poor. A peasants breakfast with day old bread toasted, oil from their ceramic pot and fresh tomato from their vegetable gardens in summer and late autumn then in winter and spring preserved tomatoes either dried or bottled.

It's spring now coming into May and the tiny creamy/yellow blossom appears and with it a huge amount of pollen, to the dismay of those allergic to it. Everything takes on a yellowy tinge as the dust becomes yellow, the cars covered and then it's over and those flowers are just about becoming tiny green olives and swelling nicely. 'Rain would be good' my neighbours say 'Good rain'. Back in the UK rain was rain. Here there's good rain and not good rain. Who knew? Good rain would be light and steady, then when the sun-baked earth was moist enough to let it penetrate and not run straight off, a steadier, harder rain would be welcome. Heavy rain on solid, dry soil just runs away and doesn't soak into the ground to the roots. Good rain, bad rain. Today we've had some good rain. 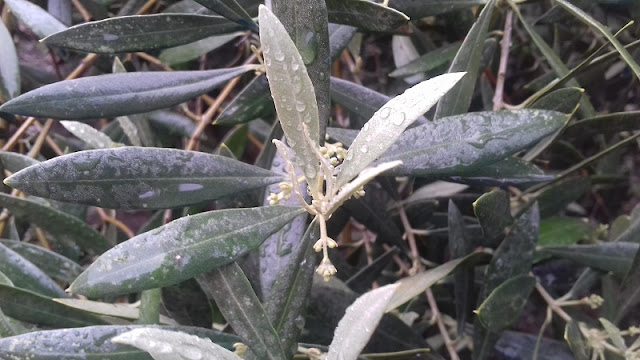 Once the real summer heat passes heading towards the end of September every tree will be cleared underneath, weeds removed, a weed-free circle around the tree trunk prepared ready to spread the nets and easily pick up any stray fruit. There's a lot of trees to prepare.
By the end of October heading into November the olives are full size and weather depending, will start their slow change from olive green, through purple to black, they become shiny like black onyx, that's when the oil is present. 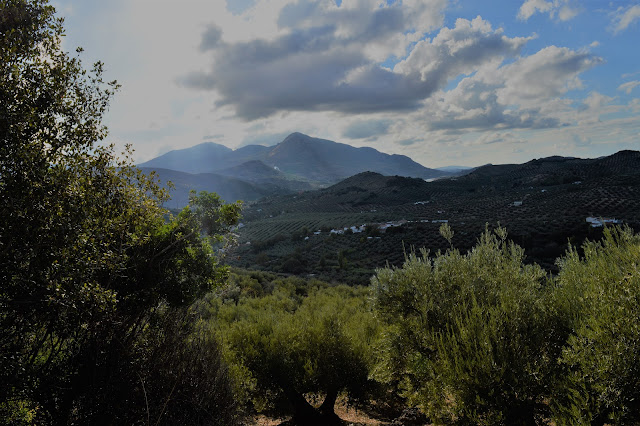 Mid December all should be ripe and ready for harvesting which, when you picture 66 million trees (just in Jaen province) and each one prepared then harvested you'd imagine a writhing, busy countryside but no. Over an average 12 to 14 week harvest it's not that common to see teams of pickers in the olive groves. Encountering tractors with laden trailers or Land Rovers bulging with sacks heading into town and to the olive oil factory is the norm. Once it would have been sacks tied on mules just two or possibly four at a time, slowly and clip-cloppingly charming. 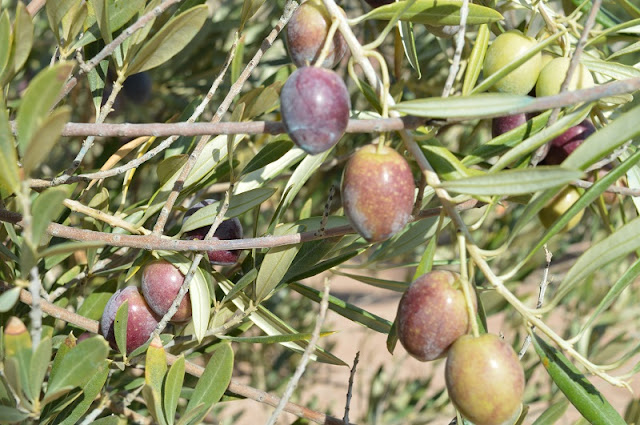 When I moved to Spain silence reigned. Only at harvest time did we hear the chattering of the olive pickers and tap-tapping of long sticks knocking the branches and the olives falling into huge outspread slightly raised nets. By the end of April all is over and quiet again for another season. Although spraying, curing and pruning never end.

Yes, the olives are harvested more quickly, yes they are processed faster and fresher but what about the constant noise? The effect of those constantly vibrating machines on the workers? What about me? My silence destroyed. For what? Speed? Financial gain? I'm not convinced that the noise, fewer workers and fresher oil compensate the disturbance of that peace.