The Sad Demise of a Battered Old Wooden Waterwheel

I love the battered, old and ruined. Especially things made of wood. Rusty heaps of once fabulous cars. Well-worn, worm-eaten wood and decaying, roofless ruins. So when I happened across a lovely little town, Albendin, just over the border into Cordoba province from my home in Jaen I was charmed.

A large white cross perched on a rocky outcrop. A narrow bridge with gorgeous old ironwork. A waterwheel replica on a roundabout, now that caught my interest. Then I saw the sign 'La Noria' to the right. I followed the directions and there in front of me was an enormous old, wooden waterwheel. 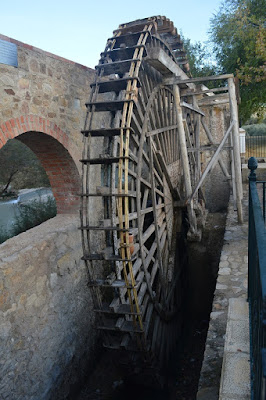 Not too battered. Old, yes. Ruined, not yet but on the way. It was love at first site. An 8m diameter wooden wheel, with a metal axis and bamboo shoots with old clay pots lashed on. Just in need of some TLC. A little sanding, some coats of varnish, new bits of bamboo, replacement pots and bingo it would be nice and shiny, not dingy and sad.

In its heyday it would have been one of dozens of working waterwheels along this, the River Guadajo, lifting river water up in its pots and emptying them into the watering channel running to the vegetable gardens around the town. Sluice gates controlled the quantity of water from the river and so the speed of the wheel and the amount of water in the channels. 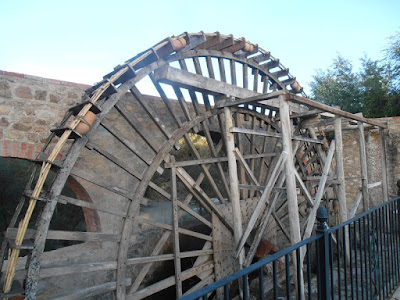 A man wandered by. As the Spanish do he greeted me, and as I do I jumped in with the questions swimming around in my head. Does it still work? If so why isn't it going around? How old is it?

It does work, or it can work but the neighbours (who have the constant drone of TVs on at home and in bars and shout over the volume) complained about it's groaning noise. So it was stopped.

My source, an old man, nearly eighty-two he proudly told me, remembered it going round in his childhood, nearly all of his life. But not now. 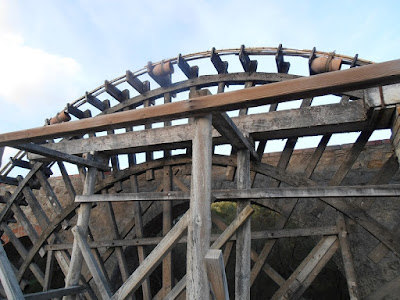 Such a simple idea, such skill in the making and so beautiful to the eye even in its dilapidated, battered state. It needs to be preserved, to be restored, a proud part of the town's heritage and as one of the last remaining waterwheels of its time. But more than anything it needs to be working as a great reminder of those simpler times and the civilisations gone by.