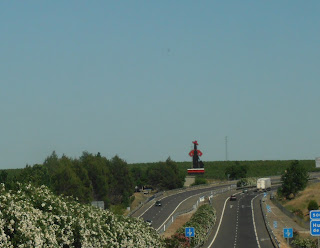 A4 Cordoba - Andujar
The black bulls were first used in 1956, though not as we see them today. When advertising within 150 metres of a road the design changed and became larger.

A 44 Jaen - Madrid
In 1994 a law banning all roadside advertising meant that the signs had to be removed. But having become a popular sight there was a public outcry. The Courts eventually allowed these signs to remain because they had become of "aesthetic or cultural significance", but without any advertising text. Although two do remain with 'Osbourne' on them. One in the airport of Jerez de la Frontera and one at the Osbourne headquarters in Puerta de Santa Maria.

There are around 90 of the 14 metre high 'Osbourne Bull' signs across Spain, 23 of them in Andalucia.

The Trade Mark 'Tio Pepe' was first registered in 1888. The dressed-bottle logo didn't appear until 1935 and went through various updates. Once colour began to be used the red and black silhouette took off. Even today Tio Pepe hostesses can be spotted wearing the red hat and red bolero.