Estepona - One of the Prettiest Towns on the Costa del Sol

Having visited most of the towns to the east of Malaga and many to the west when offered the chance to visit Estepona and one of its fabulous hotels it was impossible to refuse. The Gran Hotel Elba Estepona & Thalasso Spa was our(hubby and me) destination for two nights.

I'd flown into Malaga after visiting my mum in the UK, arrived home in Jaen at 3am, done several loads of washing, given an English lesson, done the shopping (loaded the fridge again, this time for sons feeding themselves), prepared lunch, unpacked and repacked my bag I was off again, later than hoped, back down to the coast (but this time being a passenger it was easy to enjoy) the easy drive along the coast road with the looming Sierra on one side and the glorious blue Mediterranean Sea on the other. Estepona was yet another name on the map, another destination that hadn't beckoned, a town bypassed en-route to elsewhere and somewhere I knew nothing about, we were pleasantly surprised just driving through it to find our hotel, we knew we'd be exploring it soon.

A long sea front with play parks and lighthouse with a lovely looking not too touristy town and interesting church roof. Estepona sits and a shallow bay with views of Gibraltar and, in mid June, empty beaches. 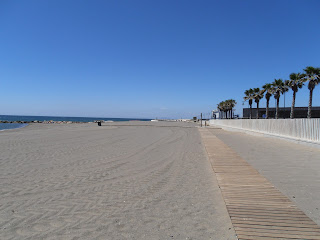 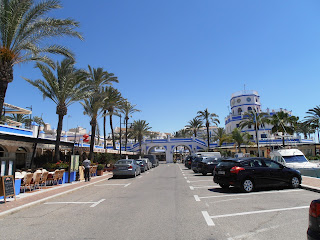 Spotting sardines being cooked over coals meant time for lunch on the beach and a beer or two of course, we were on holiday. 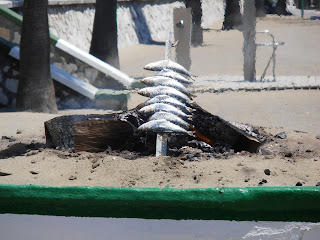 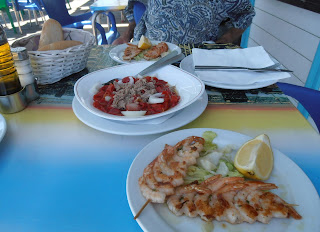 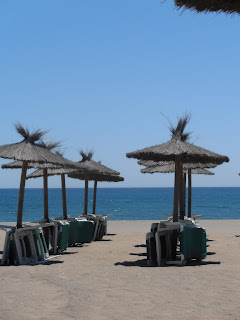 The town itself spreads out from its historical center with narrow streets and hardly a whiff of the bucket and spade brigade. We sat contentedly in the shade cold beer in hand in the pretty Plaza de las Flores. 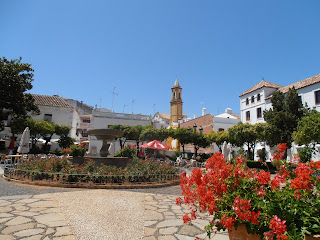 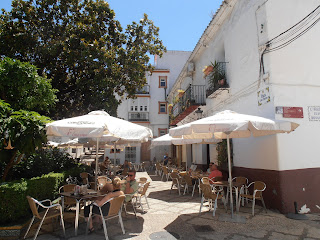 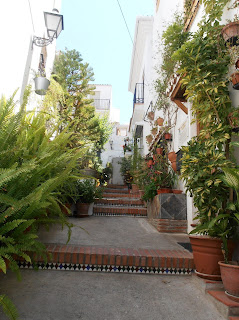 Really happy was I by the lack of tourist shops and all that goes with hordes of visitors, this could have been an inland town for its charm, rather than on the Costa del Sol/Costa del Golf, a far cry from the Torremolinos part of the coast. 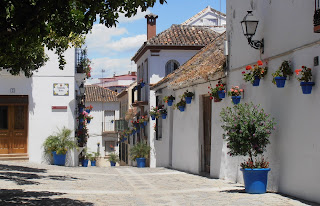 If anyone asks my favourite coastal town on the southern coast it is now without a doubt Estepona. Our stay at the Gran Hotel Elba was complimentary see some photos or read the review tomorrow.