A Walk Down The Ramblas - A Barcelona Guided Tour

I've written so much now about the history of Barcelona's Ramblas, the origins of the name and the fact that The Ramblas is actually five streets in one that in this guest post, which Rachel has kindly invited me to write for her Andalucia Explorer blog, I thought I'd tell you about a few of the highlights of my A Walk Down The Ramblas Guided Tour. 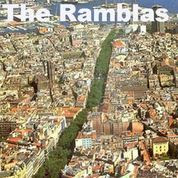 The Ramblas Walking Tour takes three hours, so I'm not going to explain the whole itinerary partly because Rachel wants this blog post to be short and sweet, partly because the walk seems to change subtly every time I do it but mainly because that would be giving too much away.

One of the early stops is the famous Font de Canaletes Drinking Fountain, where legend has it if you drink the water you'll always return to Barcelona.

This is also where Barça fans celebrate the clubs victories because in the 1930s - long before radios were common - there used to be a newspaper office here that published the football results on a chalkboard outside as soon as they were wired through.

I expect to be here in a non-professional capacity twice in May - once to celebrate winning La Liga and again to celebrate the Champions League!!! 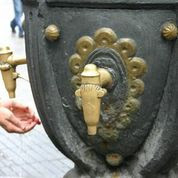 
The Flower Sellers That Fell In Love With Lorca (And Vice Versa!)

The most beautiful section of The Ramblas is La Rambla de les Flors where the flower sellers have their stalls.

At start of the the Civil War, poet and playwright Federico García Lorca came to Barcelona to stage a play at the Gran Teatre del Liceu and at the start of the run went to buy some flowers for his dressing room. He so charmed the girls on the stalls that they sent freshly cut flowers up to his dressing room every day.

Just before the very successful run came to an end, Lorca closed El Liceu, which has a capacity for 3000 spectators, and put on a performance especially for the girls from the flower stalls. Lorca is famous for describing The Ramblas as the street he 'wished would never end'. 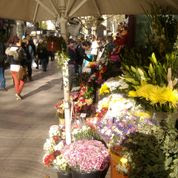 
The Best Public Market In The World

In 2005, at the World Conference of Public Markets in Washington, Barcelona's Boqueria Market was voted the best in the world, and my visitors are wowed by the sights, sounds and smells as we walk around. 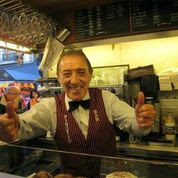 The picture shows Juanito from Bar Pinotxo, near the entrance to La Boqueria - he probably tops Messi and Artur Mas as the most photographed man in Barcelona. If we're lucky we might see Ferran Adria having breakfast there. The world famous chef admits that Juanito's tortillas, callos and chorizillos are second to none! 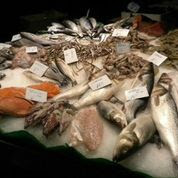 When we leave La Boqueria, mumblings of 'I'm dying for a coffee and a sit down' can be overheard.

As the last thing we want is unhappy troops, it's time to stop for breakfast normally at the Modernista Café de l'Òpera if we decide to sit inside or the terrace of Bar Mendizàbal next to L'Antic Hospital de la Santa Creu on bright sunny mornings.

Suitably replenished, we make our way down to Plaça Reial, which apart from having Jamboree, Tarantos and Sidecar - the best jazz, flamenco and indie live music venues in town - also boasts lamp posts by one Antoni Gaudí.

He got the commission in 1878, when he was only 26 and hadn't even finished architectural school yet.

What's more Palau Güell, his first major building in Barcelona and built a decade later, is just across the road on Carrer Nou de la Rambla. 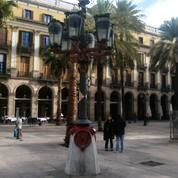 
The Catalan Inventor Of The Submarine

There's loads more gubbins down at the bottom of The Ramblas - the Wax Museum, the best-preserved medieval shipyards in the world at Les Drassanes, the Columbus Monument along with a gaggle of prostitutes and a couple of sex shops - but my favourite item is El Icitineo.

Designed by Catalan inventor Narcis Monturiol, this was the world's first submarine and 5 eminent personages took a trip in it in 1859.

Unfortunately, the Spanish Navy thought Monturiol was nuts and the idea would never catch on so he received no funding and he died in poverty in 1885.

Apparently, he was Jules Verne's inspiration for Captain Nemo in 20,000 Leagues under the sea. 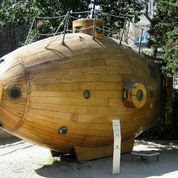 Around 1 o'clock, with brains throbbing at having to assimilate so much information, stomachs generally start rumbling and those who so wish adjourn with me to El Portalón for a slap up three-course Menu del Dia are more than welcome.

This is one of my favourite Gothic bars - it's cheap, cheerful, the food is exceptional for the price and they're happy to let you sit there chewing the fat for as long as you like.

I look forward to seeing you on the tour! 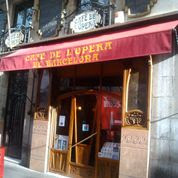 
Simon Harris has lived in Barcelona since 1988, where he had a career as a minor rock star before becoming a University English professor and finally a tour guide and webmaster.
Email Post
Labels: Barcelona Guided Walk The Ramblas Walking Guide Barcelona Walking Tour