Mainland Spain is a large and mountainous area of 505,000 sq kms creating fabulous views and challenging walking. It´s never boring and you may find that an easy walk is not so easy after all. It is over 1000 kms from the Atlantic to the Mediterranean coast with many mountain ranges in between.

Due to the nature of the country, over twice the size of the UK with around one third of its population, the remoteness of some villages and the inhospitability of some of its terrain it is likely that you´ll won´t see anybody else so be prepared and tell someone your route or destination as you can often be away from mobile phone coverage.

Spanish maps are nowhere near as good as the UK´s Ordnance Survey maps or as easy to come by. The 1:50000 and 1:25000 scale maps are quite comprehensive but generally rather than specifically.

Maps can be bought online via Tienda Verde

The Natural Parks are rather better equipped with maps showing tracks and walking paths, often marking the main routes such as the GR, Gran Recorrido, in red, PR, Pequeño Recorrido, in yellow and supposedly LR, Local Recorrido, routes in green which I´ve not seen marked. 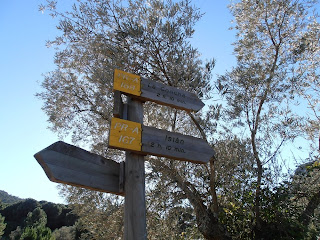 Only the GR routes are national responsibility which is why they are generally much better marked, although some areas and Natural Parks seem to be improving and maintaining their walks better than before. 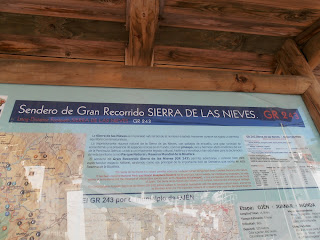 Best Time for Walking in Spain

Spain, particularly inland, gets very hot from May to September. It´s very important to take your own ample supply of water with you. There are often wayside fountains but many say, no potable, not for drinking.

Personally I think May is the best time for walking as it coincides with the wild flower display has been getting better each year since the use of weedkiller has declined.

We love walking (though don´t get time to do as much as we´d like too) and think our holiday home Casa Rural El Reguelo is a great starting point for walks from the door step or taking the car to different points for walking or cycling.

We can hire you bikes and a rack if you fancy a spot of mountain biking or a gentle cycle on the Via Verde or we can drop you off for cycling or walking at one point and pick you up at another.