We´d been told not to be late as the tour starts at 12pm. With time pressure on and the need to stop for breakfast - una tostada, media con tomate y aceite and coffee we set off earlyish the first Saturday and first really cold morning in December.

Checking the weather forecast we had -2ºC at home and were heading to Granada with brighter looking prospects of 0ºC. Hubby snuck the snow boots for the tyres in the car, but I spotted them (grimacing). 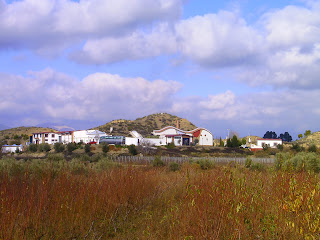 Vineyards cover part of the flatlands surrounding the colourful Pago de Almaraes buildings, but only red grapes are grown here. White grapes are bought in from further afield, 240 tonnes enter the winery on average each year producing the 200,000 bottles of wine on the premises or already shipped out.

American Oak and French Oak barrels line the walls of the brightly painted cave-cellars of the Pago de Almaraes winery. This is troglodyte country just outside Guadix, the soft red sandstone is littered with doors and white chimney pots giving away another semi-underground dwelling. 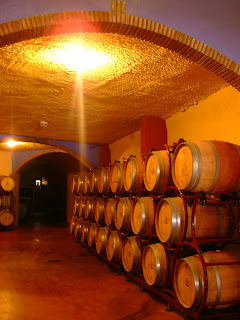 The cellars, partly underground, of this smallish producer of award-winning wines was my second winery visit. Pago de Almaraes started in 2001, an area with a dry Mediterranean climate giving a variation between 900 -1,600mts above sea level and producing a huge variation of daytime and night-time temperatures which produces a slower ripening of the grape and maturing of the wine. 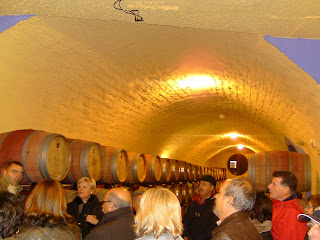 Lesson Time in the Bodega

Resting time for the Reservas, every three months these 90,000 bottles are turned, upright, then flat. 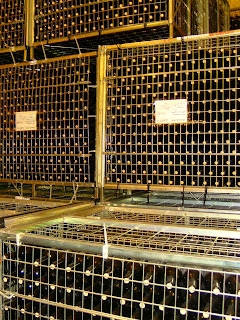 Lessons over, get me to the tastings and some internal heat. 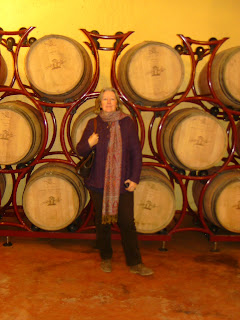 Some of Pago de Almaraes products. 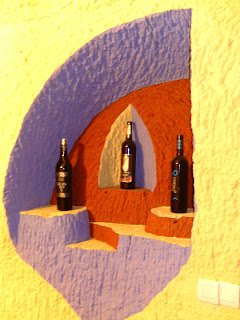 Mencal - a dry white wine from Cabernet Sauvignon, Moscatel, Chardonnay and Torrontes grapes. My thoughts, a veeeery nice, light fruity and dry, almost lemony with a hint of Chardonnay.

Mencal has won many awards.

Memento 2009 - a Tempranillo, Cabernet Sauvignon and Syrah grape, heavier than the Almaraes and richer in colour. My thoughts, rich, fruity, heavyish and far too smooth and quaffable.

Also a national and international winner.

Caves stay at an ambiente temperature of 18ºC all year round, only the humidity needs controlling.

The different barrels, French Oak or American Oak produce unique flavours in the wine, such as coffee and vanilla.

The Reservas are turned every three months to allow the corks to shrink and expand continually.

I enjoy wine (I mean really enjoy wine) and want to understand more about the complexity of it. Maybe I´ve discovered my true vocation. Anyone need a wine taster?


Read other posts about Guadix?

Hotel Abentofail - a small hotel in the centre of Guadix

Two-middle Aged Ladies in Andalusia - by Penelope Chetwode in 1951


Visit Pago de Almaraes website. There is an English version of the website, but I´m not sure if they do tours in English.