For several years running one of my neighbours, Loli-Mari, has invited me to go on a coach trip with her, I´d always declined. But this year pinned against Mercadona´s cold meat counter I found myself agreeing to go to Torremolinos and the Fish Festival where over ten tons of fish are given out for free along with beer, sangria and wine.

So at 7.30am on June 7th I arrived on her doorstep beach towel, sunglasses, suncream and swimming costume in tow. We headed towards Castillo de Locubin, our coach rendezvous, picking up some more Spanish neighbours, Carmen and Antonio, on the way.

After an obligatory breakfast and toilet stop in a huge impersonal (preferably not to be repeated) coach cafe we arrived at the Med. nearing 11am and with temperatures a lot less than home but much more humid. 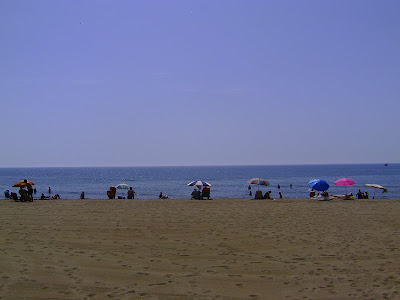 Playa Carihuela in Torremolinos and bordering with Benalmadena is the location of the fish festival that has now completed its 25th year. We paraded up and down the promenade checking out the bars taking part in the fish giveaway, eyed up the shops and retreated to the Benalmadena end of the sea front and our chosen bar for our free lunch. 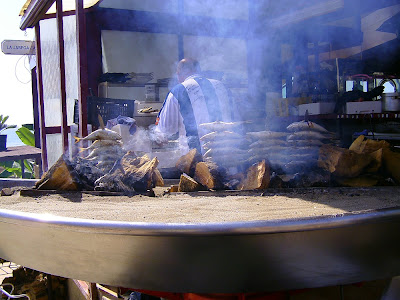 Queues, smoke, music, free drinks - alcohol only, and a plate of fried fish and several beers later under a palm tree I was presented with a red carnation by a Sevillana-dressed señorita for my hair. 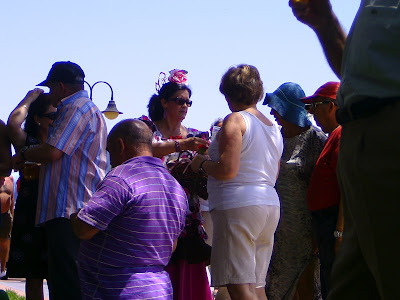 The free lunch was served non-stop until their supplies ran out, with no restriction on the number of times you could join the queue (or queue jump as my neighbours expertly did).

When all had calmed down and stomachs were full we went off to explore the marina and ended up paying a childs ticket price of 5€ each for an hour boat ride towards Malaga. 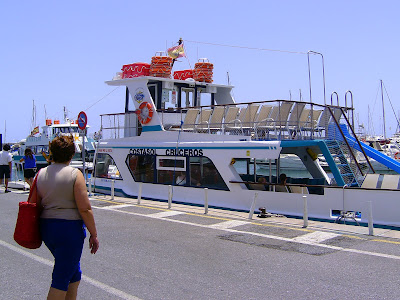 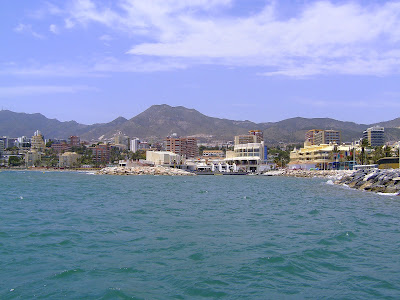 Torremolinos from the cruiser

A little more sun than intended and an hours relaxation and sea breeze would have been worth the full ticket price of 9€. Next time I fancy the dolphin spotting trip on a calmer day. 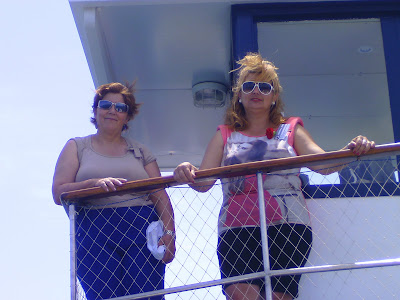 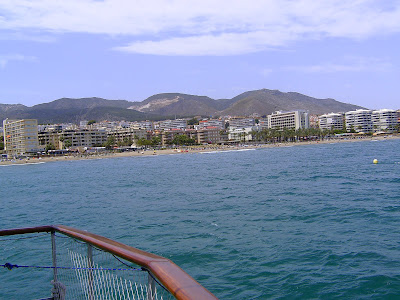 The Benalmadena area of Puerto Marina was a pleasant surprise, very clean and well-kept with a better class of shop than along the sea-front and a huge apartment block in the middle accessible by bridges. 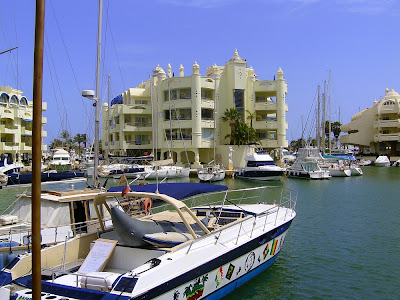 All in all a long, tiring and fun day - will I be going next year - quite likely so.
Email Post
Labels: Benalmadena Puerto Marina dia del pescaito Torremolinos fish festival costa del sol free lunch