Having headed into Jaen to do some paperwork I soon had a feeling that all was not well. The roads were quiet and parking was available everywhere. Not for the first time I´d headed into my capital city on a fiesta day.

This happened to be the 11th June and a local holiday in honour of La Virgen de la Capilla in the San Idlefonso district of Jaen. Every year the church is decorated inside and out with flowers and special services are performed before the virgin on her throne is carried around the streets and the party begins.

This year event lasting several days if it falls on a weekend is to commerate a heavenly vision seen moving from the cathedral to the spot where the Capilla is now built. 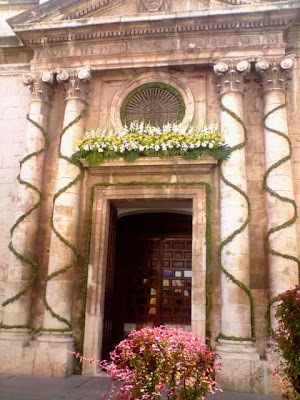 So instead of visiting government offices I explored parts of the city never before explored, found some new interesting corners and more fantastic wooden doors.

As I was "working" I´d no camera with me (photo above not very good as it was taken on a mobile) so I have to go back again, not only to get the paperwork sorted but definately with camera, so many doors to
photograph, they´ll need their own post, but also so many parts to be reached that I haven´t reached before. br
Email Post
Labels: Andalucian fiestas churches in Jaen churches Jaen fiesta Jaen Jaen holidays national local holidays pilgrimages Jaen processions JAEN Virgen de la Capilla