Tapas, a tasty bite and whether you have one with a drink, go and ¨do¨ tapas or have a ´tapas crawl´ they are everywhere. Prices vary as does quality and quantity and some are still free.

Granada and Jaén seem to be the last bastions of the free tapas, which in the case of Granada is fitting. Granada was the last stronghold of the Moors in Spain although tapas came after their defeat.

There are several stories about the origins of tapas, you´ve probably read many, I´m going to tell you one too. This is my translation from a tapa route leaflet, Ruta de la Tapa III around Jaén that I unfortunately missed, but I am checking out the establishments one by one for my Jaén Tapas Tours. 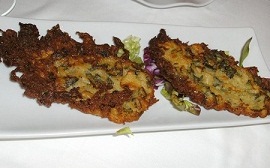 We can define tapa as a small potion of food that is served as an accompaniment to a drink. Its origins are uncertain but this is one of the popular anecdotes.

History tells us that Alfonso XIII was visiting Cadiz province and on one of his stops he ordered a glass of sherry. The barman covered (or tapó) his glass with a slice of jamon, on being asked why the barman explained that it to stop sand getting in. The King, being thirsty ordered another sherry with its cover.

Other stories say that a different Alfonso, Alfonso X the wise, ordered all the bars to serve something to eat when serving wine, as he due to an illness, had to eat when drinking wine. Yet another version says that the idea of serving food with alcohol was to avoid the frequent fights and disturbances that  occured in the inns by lessening the drunkeness.


It doesn´t matter which tale is true, tapas are here to stay free or paid, Michelin-style or chunky. Many of the smaller cities don´t offer anything like the prestige given to tapas by the likes of Seville or Barcelona.

A free tapa gets you whatever morsel is set before you, maybe just olives, crisps or fried almonds but a choice and paid-for tapa can make up an entire meal of many different gastronomic delights.