A busy morning yesterday saw hubby´s car, which has been off the road for months while he located and fitted a new engine, needing its MOT or as it´s called in Spanish an ITV.

I had a hospital appointment and more than one Café needed to be checked out afterwards.

The car, an old (English RHD) Peugeot 405 estate raced through its inspection without a blip (huge sigh of relief). Hubby an engineer by training and a fixer of EVERYTHING has a desire to keep his 4-wheel mule on the road until it gets to be 25 then he doesn´t have to pay road tax! With its new turbo engine it certainly goes, just doesn´t look so smart.

My inspection wasn´t so successful after a prodding and poking the doctor realised I should have had an appointment for an X-ray not to see him! So another treat awaits, appointment no. 2 coming up soon. 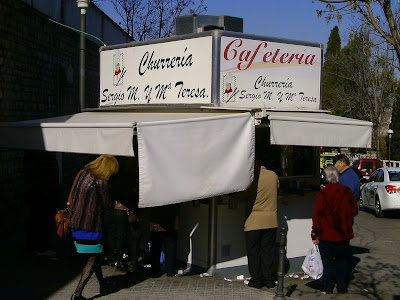 Leaving the hospital hubby caught a whiff between traffic fumes. "Coffee?" He pleaded. My coffee urge wasn´t so strong that I´d stand at a kiosk by a roadside plus I´d pre-plans known only to me, (and the smell of frying churros is too tempting) so we high-tailed it to the city centre for coffee.

Having spotted an El Tren Café I had to reminisce our experience in the one in Granada (where we left a child behind).

No kids today and the Café along with the woman serving were well below par. The drinks pretty poor too. The USP of El Tren Café is the train running around a track suspended from the ceiling, there was a track but no train. I asked if the train worked and got a "Si".

I guessed that when she´d poured our coffee and Cola Cao (a trademark hot chocolate) she would show us that it did indeed work. No such thing. No further contact at all she just carried on using her laptop behind the counter as if we hadn´t come in. No star rating given here.

I studied the litter strewn floor and kept my camera in my bag. "More coffee?" I suggested "Somewhere else?" I hadn´t let on my next destination as of yet.

Not too far up the Avenida de Madrid I´d already spied my next coffee shop, a re-visit to ensure its consistency. 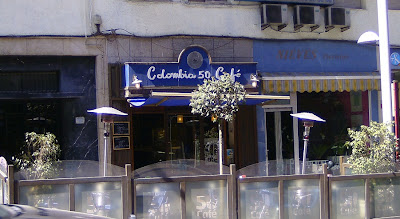 With a narrow inside blocked by a loud group and hubby not wanting to sit in the sunshine by the busy road we took the safe option, a table by the door and cake counter.

With reserved orders I had black coffee the best in ages and he had a Cola Cao far superior than the one I´d just had. 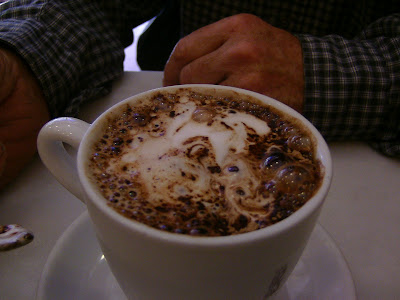 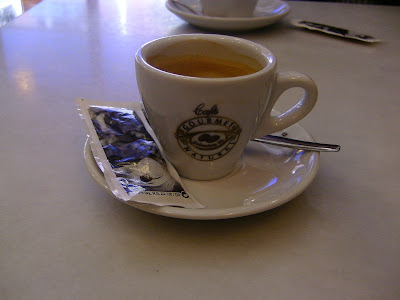 I´m not a cake eater but I am nosy so I checked out the cabinet and thankfully nothing appealed. The most disagreeable looking lump gave me a curled up lip. "Que es?" I asked trying to keep revulsion from my face. It didn´t work as soon as she said "Leche Frita" my stomach churned and face fell.

Fried Milk! How disgusting all of me cried. Hubby disagreed. I have to admit when served it was more appetising than the lumps in the counter but Fried Milk! Ugghhh. 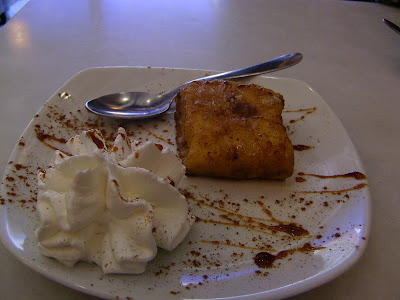 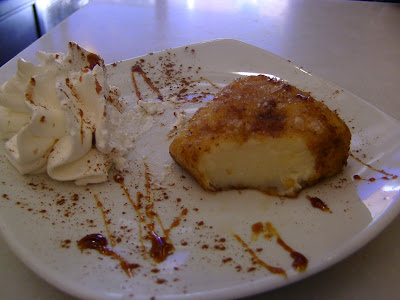 I won´t be making Leche Frita at home but Hubby might. If I´ve sold it to you and you want a recipe I´ve a great selection in my Spanish recipe book collection, give me a shout. Or take a peek at the Mouth-Watering Spanish recipes ebook which also has a version.