Famous Bandits and Highwaymen in Andalucia

When you´ve watched films like Entre Lobos, walked the rugged interior, checked out Sierra de Cazorla, Segura and Las Villas natural park and wondered how the Moors scoured the countryside and built watchtowers on remote hillocks it´s easy to imagine the wild interior being controlled by bandits.

The most famous bandelero in Andalucia was José María el Tempranillo who during the 19th century XIX roamed and ruled the towns of Palenciana, Corcoya, Jauja, Benamejí, Casariche, Alameda and Badalatosa. 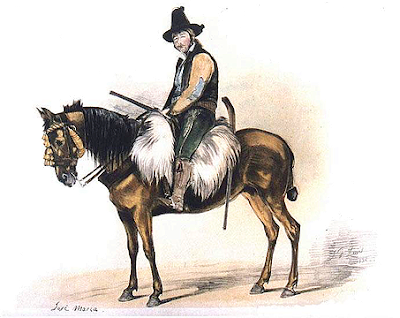 The story begins near Lucena in Cordoba province, José Maria born in 1805, fled to the hills at the age of 16 after killing a man who had attacked a female member of his family. Knowing he couldn´t go back he joined a group of outlaws much older than himself. This is what gave him his nickname ´Tempranillo´which means ´early start´.

The gang stopped and robbed travelling parties in daylight and without violence, and it is said with style. "Such beautiful hands need no such adornment, give me your rings".

For more on bandit country, guided tours and el Tempranillo visit this website Tierras de José María el Tempranillo, you can even book to be held up and robbed!

In The Tales of the Alhambra, Washington Irving writes about bandoleros in more than one instance:

....Sometimes the road struggles through rugged barrancos or ravines, worn by winter torrents, the obscure path of the contrabandista; while, ever and anon, the ominous cross, the monument of robbery and murder, erected on a mound of stones at some lonely part of the road, admonishes the traveller that he is among the haunts of banditti, perhaps at that very moment under the eye of some lurking bandalero.