Figs are wonderful, little pockets of nutrition and moisture on a hot day. Their season is long, if different varieties grow around you they can be picked from early June to late September.

We have a ´weed´ tree that we tried over years to get rid of and finally gave up. This year it has a great harvest of smallish figs, too small to bother opening and eating when you´ve been used to larger ones.

These small chaps I pick, wash cut into quarters and dry outside on trays well wrapped in clean old net curtains, specially saved for this purpose. This year I´ve decided to cut them into smaller pieces to save cutting them up when dry and hard. 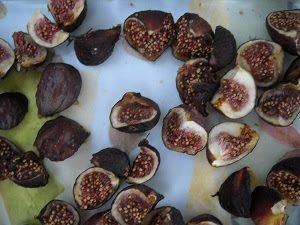 I´m hoping these´ll turn out as a large raisin that can be used as it is. When dry I pop them into a jar that´s been sterilised or even straight out of the dishwasher and, if not used, they keep for years.

I used to make fig rolls, not the biscuit in a packet but, a solid cylindrical sausage of minced figs, orange peel, aniseed and sometimes dark chocolate.

They were well liked and being English hubby used to put a slice between two biscuits. I´ve not done those for years, the son that liked them isn´t around much, the rest of us don´t like dried figs and hubby just doesn´t really do sweet things very often.

The ones in the photo are semi-dry, they´d been outside for 24 hours. At this time of year we´re getting 17-20ºc at night so I don´t bother bringing them in. Later when the nights cool down I usually bring them in or actually I put them in the car overnight. They need moving around and not leaving in the same space for too long or ants find them.

When I put these on the tray there was barely space between them and they were well packed on. When dry it seems like double the amount could have been done.

I´ve never yet dried tomatoes, mean to have a go every year, maybe this time. Grapes dry well, they´re just fiddly and sticky to halve and de-pip, I´m hoping for an attempt at juicing them this year.