Another Black Bull for my Collection

Another Black Bull spotted and photographed. I really don´t know the why the compulsion to get the camera out but there is just some draw to those massive guys that make me yell "ssstop".

Unless I´m driving of course, then it´s "What are you doing?" from any other occupants. Yep I´m a pain, best to escape on my own really. 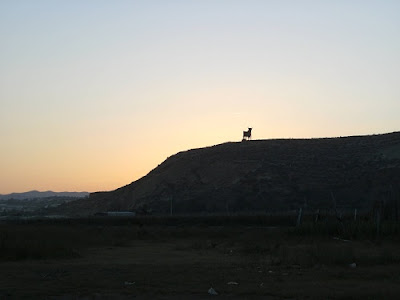 Did you know there are twenty Black Bulls in Andalucia? And that three of them have become national monuments? The other seventeen are in the process of being registered.

The 13,13 metres tall signs were put up between 1958 and the late 70s, when the government banned advertising on national roads in the 1990s they were to be taken down. So but for the huge national protest they would no longer adorn our roadsides. And I would be not the wiser and have less things to spot and snap.