Wow time really shifts along without me at times. School finishes on Wednesday, My youngest and I fly to the UK Wednesday evening and my middle son is staying home alone for the first time on the dog, chicken and watering watch.

I have to admit I´m more worried about the last three not being fed and watered sufficiently than I am about his intake. At going on nineteen he knows how to eat and does so with an amazing frequency.

While I´m gone my eldest is coming home. Umm it´s only just struck me how good his timing is. Still he´ll be around for a day or two when we get back before returning to La Herradura where he´s an apprentice guitar maker. 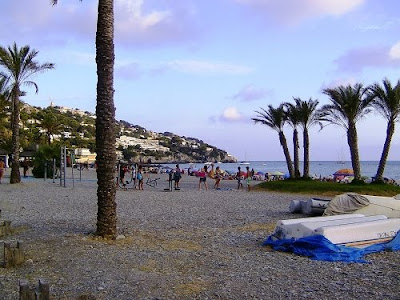 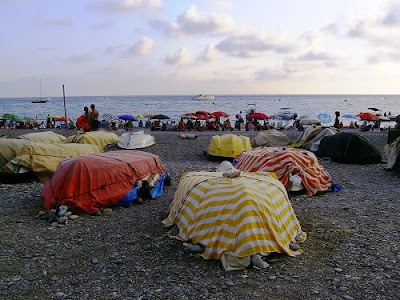 La Herradura, which means horseshoe in Spanish, is a lovely less touristy horseshoe-shaped shingle bay between Salobreña and Nerja on the Costa Tropical or Granada coast.

I´ll have to have a shifty at his photos, which are far better than mine. He did a months guitar making course last September and stayed in an apartment across from the beach, so he has some lovely sunset shots.

I´m on a trawl through the in-head lists of "to-do" before going away. With our holiday home Casa El Reguelo pool to maintain and new veggie garden to set up watering for, a neighbours pool we use and look after to top up and chlorinate, a huge fridge stock-up to do etc. You know how it goes......

And the hardest thing? What clothes are needed. Going from 35ºC, shorts and vest to a rainy UK do I need socks, jumper, shoes not sandals? Pyjamas? Oh no and party gear, don´t do that very often and pressies. It´s a tricky conundrum which I usually get wrong, but doesn´t really matter in the end.
Email Post
Labels: apprentice guitar maker costa tropical Granada coast guitar maker Spain guitar making course Spain La Herradura Spanish guitars made by apprentices