The Day of Andalusia or Andalusia Day - Dia de Andalucia, in Spanish, celebrates February 28th 1980 when it was the vote for the Statute of Autonomy of Andalusia. The date when Andalucia became an autonomous community of Spain and took on its own flag with green and white stripes. The most important politician in the history of Andalucía, Blas Infante, is thought to be the creator of the Andalusian flag with its coat of arms and also the regional anthem or hymn.

The provinces of Andalucia are: 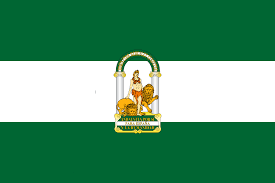 Throughout Andalucia 28th Febrauary is a holiday. There is no school, the banks close and many towns festoon their balconies with the Andalucian flag. Schools commemorate before the day by giving the children the typical traditional Andalusian breakfast of bread, in which a hole is made then filled with olive oil (extra virgen of course) often with squares of chocolate, Cola Cao - hot chocolate or churros dipped in chocolate or sugar.

The schools do plays, drawings and sometimes processions that go together with the regional hymn or Himno de Andalucía. It's a day my kids looked forward to as the day before they did little at school and the day itself was a holiday! In some places like Malaga, schools close for a week and it's called Semana Cultural, cultural week or Semana Blanca, white week.

If the 28th falls on a Tuesday or a Thursday the schools usually get two days holiday or more! This year it falls on a Thursday, my son (at college) has Wednesday, Thursday and Friday off, my students of English have Thursday, Friday and Monday off! What's not to like about Andalucia Day or three!