One (very) cold weekend at the beginning of February I joined around forty other bloggers on an iniciative A Un Hora de..... One Hour from..... in this case my province of Jaen. The weekend started on Friday evening with a visit to the brand new Museo Ibero - the Iberian Museum which unfortunately I didn't get to visit as I couldn't arrive in time. The museum, opened by the King of  Spain at the end of 2017, houses one of Spain's most important collections of Iberian art. I'll be visiting it soon!

Our stay was at the 4* Hotel HO Ciudad de Jaen just outside Jaen city with plenty of parking which is one of the banes of the city. We had views of the cathedral and the Parador on the first evening but by the  morning they were invisible in rain and mist.

Just across from the hotel there is a 'show cooking' kitchen and our first evening was full of stands of incredible local products and displays and tastings of tapas made by local chefs, we watched them preparing some delightful delicacies then photographed and sampled them, this was hosted by Jaen Gastronomico who put on frequent events with local chefs often as fund raisers. 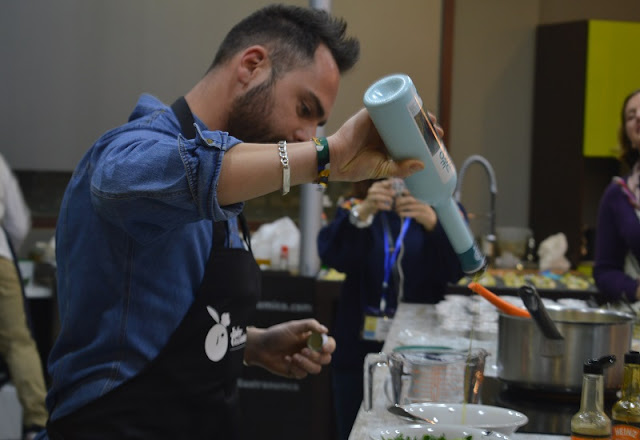 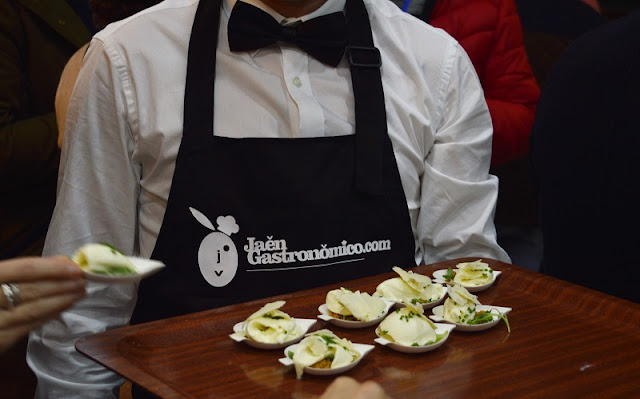 These initiatives, my first but there has been others in Cordoba, Sevilla and Huelva as well as a Game of Thrones orientated one, are sponsored by many companies and Ford Motors being one of them they supplied us with a range of cars that we drove around the province. 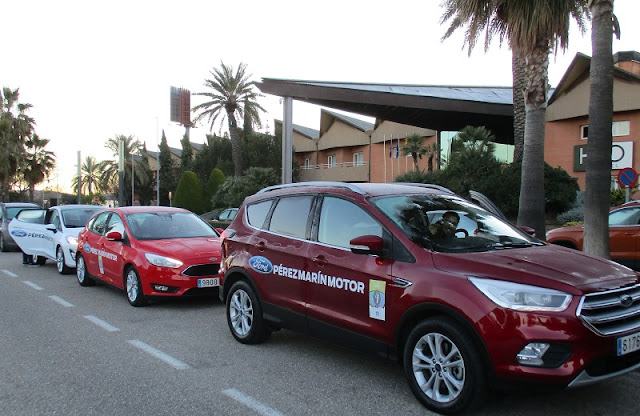 Our first car was an orange automatic Ford  Ranger and hubby happily climbed into the driver's seat as we headed off to our first stop at Torredonjimeno, a town with some charming architecture and partial remains of its castle. 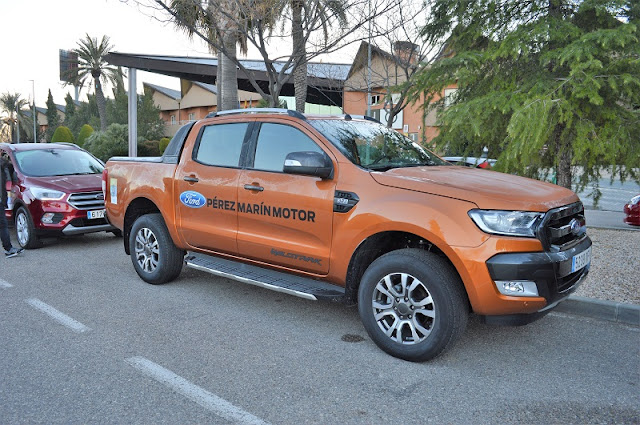 Jaen has a plethora of castles which have been linked together to create the Castles & Battles route and the province has the largest concentration of castles and fortifications in Europe. 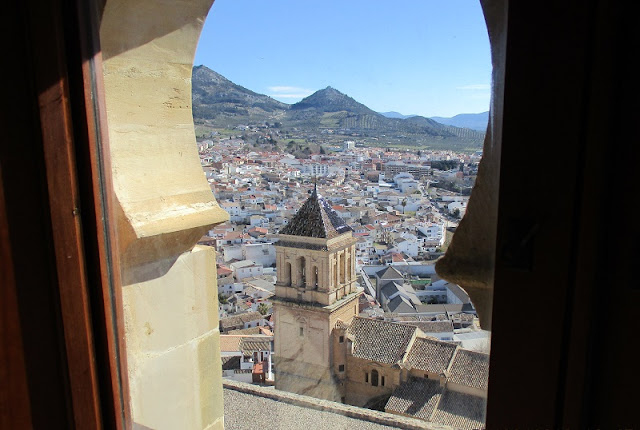 Torredonjimeno is a town I've visited many times but with a local and knowledgable guide the streets were more attractive and with amusing sketches of 'times gone by' played out in various localities I was happily shown a different aspect to the town and its history such as the departure to France in search of work as many were forced to flee their homes in the 'years of hunger.' 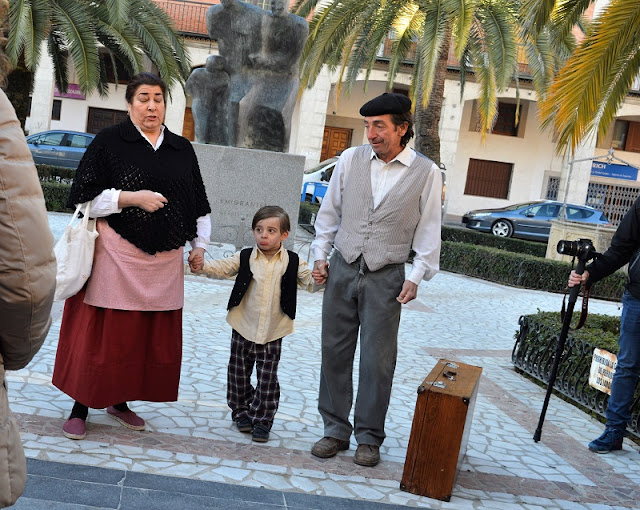 Walking around, new to me, parts of the town was a pleasant surprise with some gorgeous architectural buildings, the partial remains of the castle and mini-museum are all worth a visit and it's now on our list to take friends and family there.

From Torredonjimeno we drove, a different driver and a different car, to Alcaudete, another nearby town for me which I didn't know as well as I thought. Alcaudete Castle is also on the Castle and Battle Route. 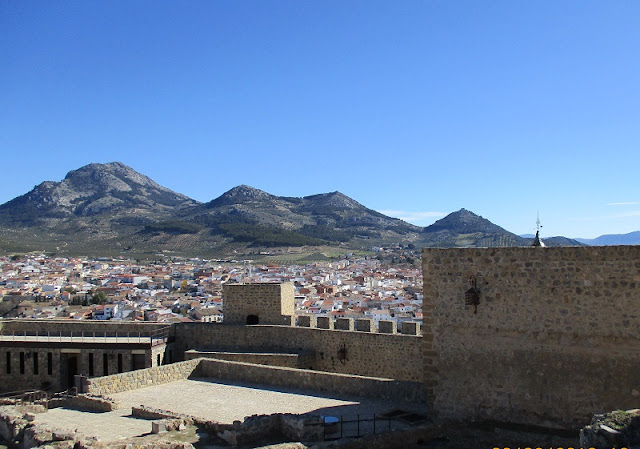 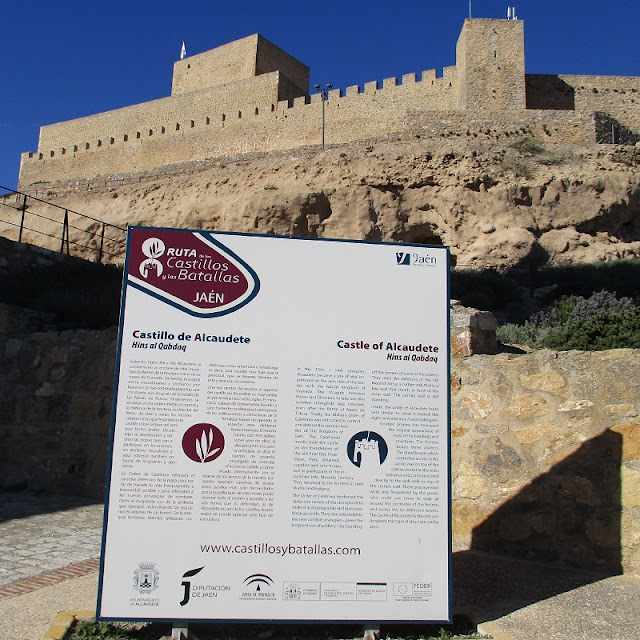 Lunch was in Alcaudete at the lovely restaurant La Cazuela Andaluza and very well fed we were too, as you can see by these photos. 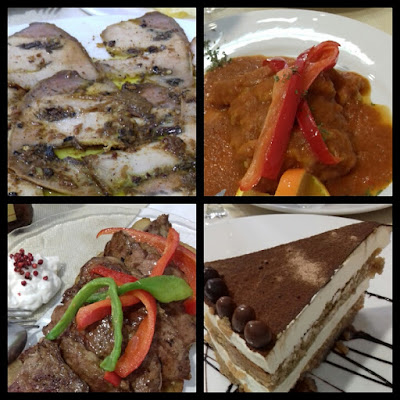 From Alcaudete to Alcala la Real and the incredible fortress - Forteleza de la Mota and the part hubby hadn't seen before its tunnels. The fortress gives an incredible insight into medieval life within a walled city and is one of the most complete (with ongoing restorations) and most visited fortresses in Spain. It also won an award in 2017 for its restoration project. This model gives an idea of its size. 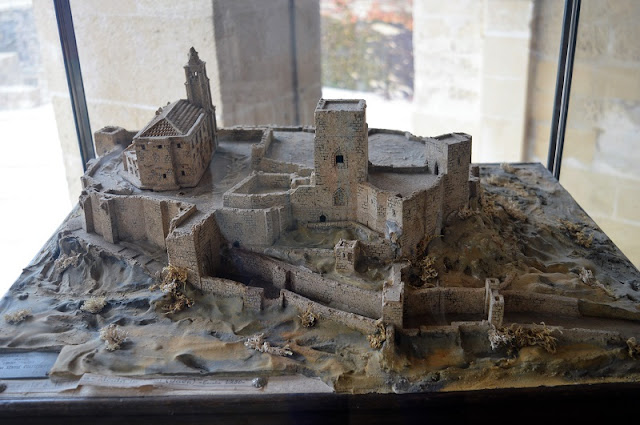 From Alcala la Real it was my turn to drive a Ford Kia, a nice smooth ride which felt smaller and more compact than it is, do you think Ford would swap my ancient 7-seater Sharan for a Kia? We arrived in Cambil, a stunning little town with an enormous rock almost in the middle, at night and about 3 degrees centigrade, bravely and freezing we wandered around the town. Another one to revisit in better climes and in daylight, it's just off the Jaen to Granada road and worthy of a stop. 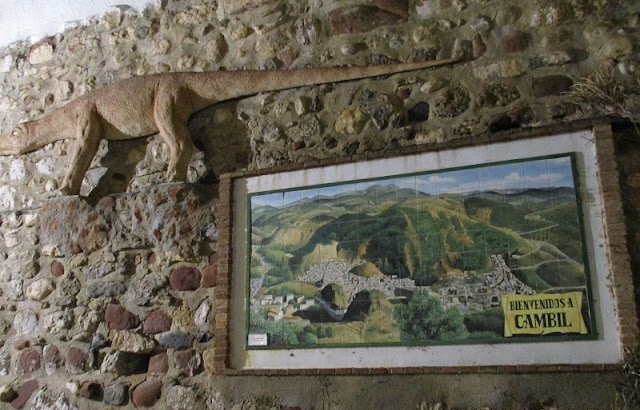 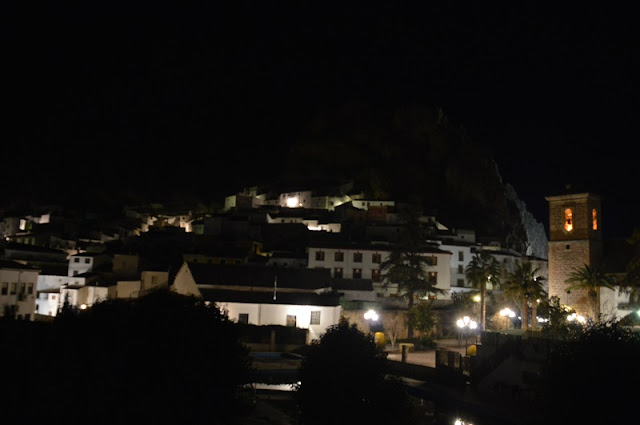 After a cold but blue sky day and so many kilometres, superb scenery, tantalising towns and curious castles it was time to retire back to our hotel and recharge with a glass of red wine in the hotel bar before the next day.

The morning began a little warmer because the cloud and mist has come in overnight and from my terrace the view of Jaen city had disappeared in a shroud of cloud. Not too daunted we set off this time to the north of Jaen and to Picualia olive oil mill. 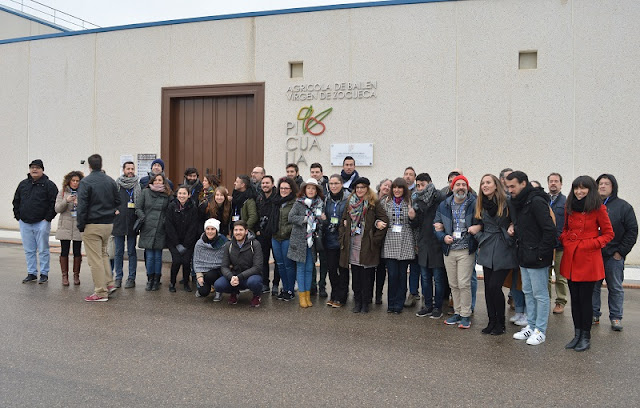 If you've ever wondered how olive oil is made this is one of over 300 olive oil mills in Jaen province that is open for tours of the mill. Picualia produces award-winning extra virgin olive oils as well as olive oil marmalade that you'll get to sample on your visit. 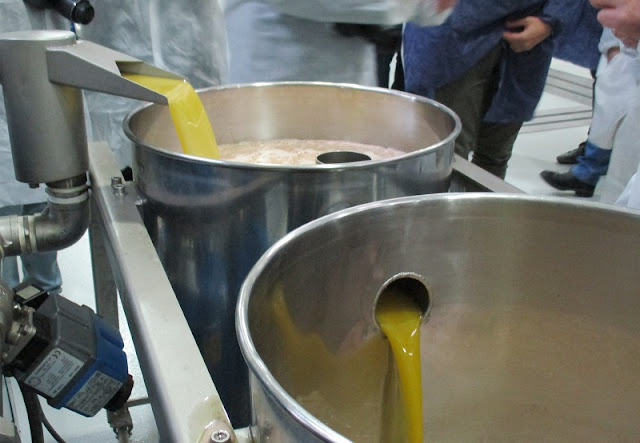 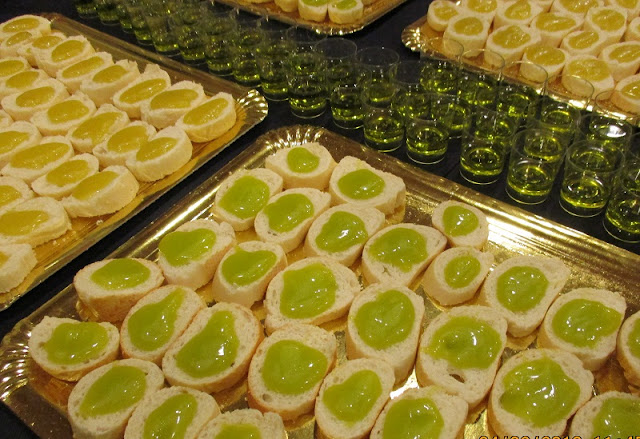 We then moved on the a small town that is quickly becoming one of my favourites in Jaen province - Baños de la Encina with its enormous oval castle and sandstone houses. If you like Ubeda and Baeza many of the houses here were built around the same time for the rich merchants. 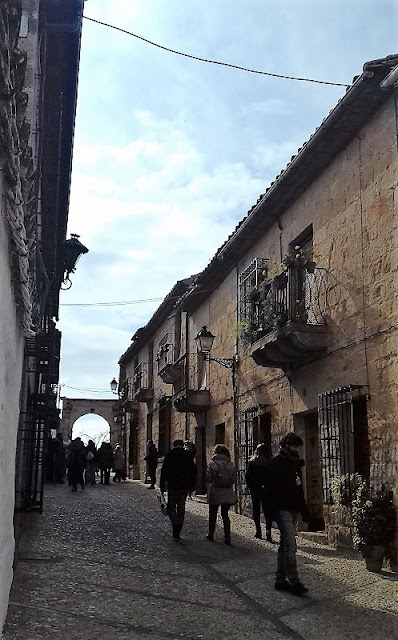 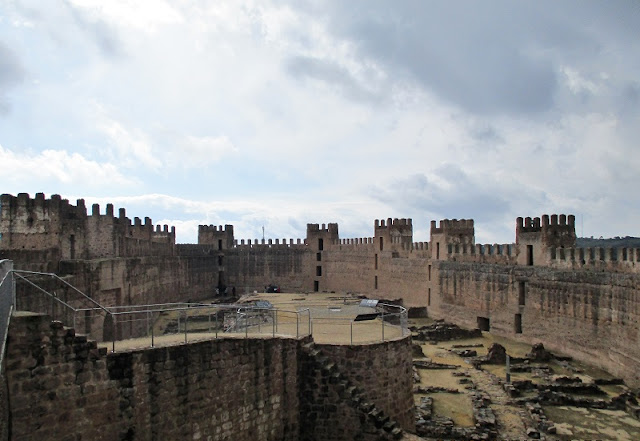 To round off a cold but fun and busy weekend we had lunch in Baños de la Encina at Hotel Palacio Guzmanes and were shown around the lovely ancient building and the interesting and indivdual bedrooms, this would make a great place to stay with its open terrace and views and lovely plant-filled interior patio. 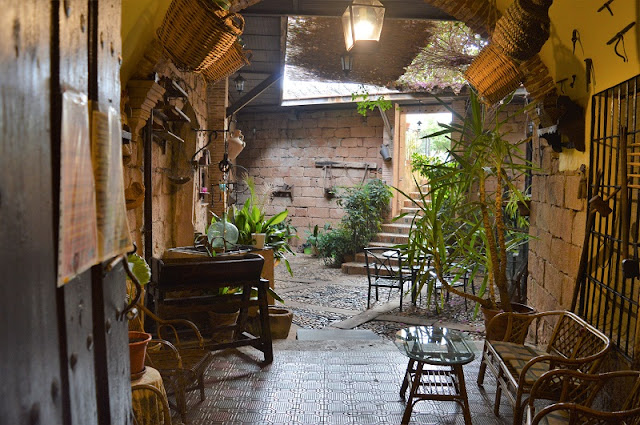 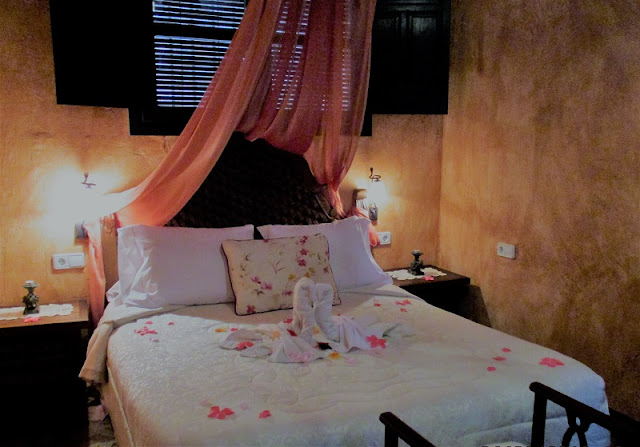 And it was back to the cars, my turn again with a Ford Focus, to return to Hotel HO, collect our cars and head home. Although the weekend was incredibly cold it didn't rain until the moment we left everybody and got in our own car! What a great weekend. Does it make you want to come and visit Jaen?


A Una Hora de Jaen was organised by Guadalinfo, thank you to them and the sponsors Ford and Perez Marín Motor, Cruzcampo, the town halls of each town visited and the individual businesses which made the weekend so informative and enjoyable.
Email Post