Salmorejo - Do it Yourself

Having just been (again) to Cordoba, home they say to Salmorejo the thicker cousin of Gazpacho usually made without cucumbers. I'd sampled a mediocre Salmorejo and a prize-winning one and thought it time to make it myself.

Having got Gazpacho down to a fine art, I now add extras like red pepper, green pepper and apple (don't tell the only son who partakes,) it was Salmorejo making time. 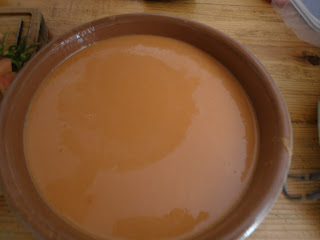 I perused the shelf containing a rather large collection of Spanish cookery books determined to pick out just one and follow a recipe rather than flicking through loads. I picked out Casa Moro the second cookbook by Sam and Sam Clark and (almost) following the recipe to the letter, something very rare, produced a version well below the winning Salmorejo Amontillado but superior (hubby said) to the one in Bar Taberna Santos. 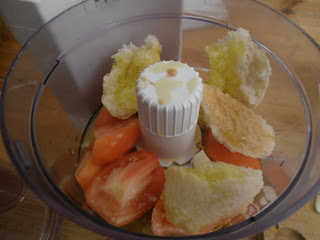 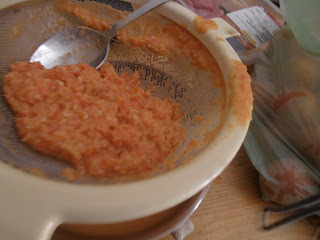 It's a messy business so while tomato juice was being spread around I made Gazpacho as well, when carrier bags full of tomatoes make it difficult to get other stuff in the fridge it's time to try and use them up. I didn't succeed but made a huge 5kg dent in the supply. 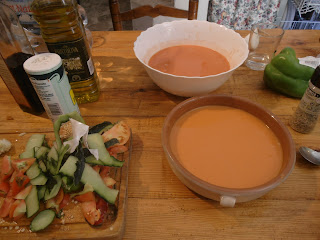 Salmorejo ready for grated hard boiled egg and jamon garnish and Gazpacho ready to be served in glasses.

Salmorejo Recipe but not the one I followed.