The fabulous new semi-pedestrian part is all finished in Cordoba, goodness knows how long it is since I was there and able to park with the fabulous Roman bridge on one side and the Mezquita a minute walk on the other. 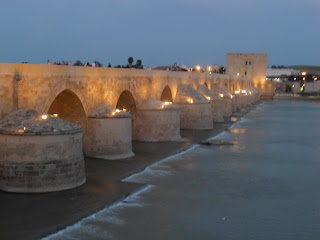 Roman Bridge Cordoba over Guadalquivir
At 9.30 pm the temperature signs read 39C, and so humid. We wandered, slowly, around the intricate walls and huge doors of the Mezquita closed for the day. 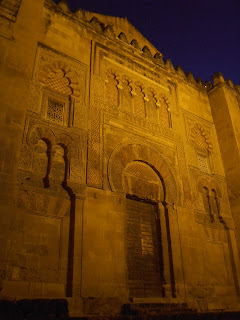 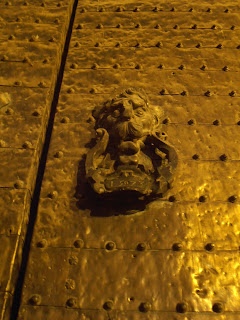 Explored the narrow potted-flower filled side streets and headed into a tiny taberna for a beer and some air con. 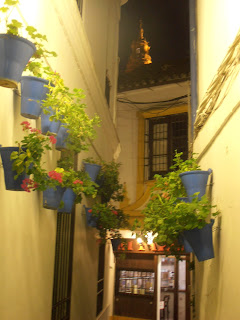 Calle de Flores
Famous for its massive tortillas (each made from 5kg of potatoes, which were indeed large but not particularly special, Bar Taberna Santos also offer an array of tapas. So when in Cordoba it has to be Salmorejo, and so it was - Ensalada Rusa, Russian Salad, Tortilla and a Salmorejo. 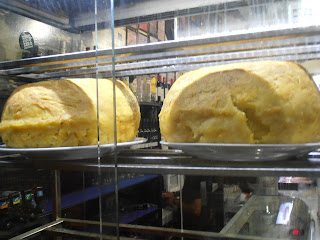 It is so tiny that we had to stand at the bar. I kept my eye on the one table but they weren't in a hurry to abandon it, so tapas at the bar or on the Mezquita wall opposite was a no brainer, we ate in the cool and standing up. It was a quick stop. 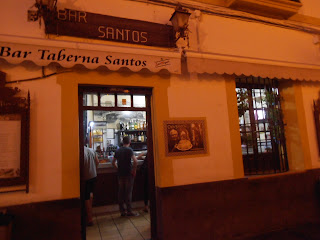 Hitting the street again's like the blast of heat on opening an oven door, amazing how quickly you forget how hot you were, and then become so again. My back (and knickers) were soaked, yet again, in no time. 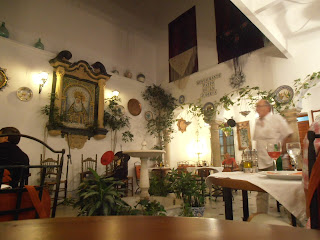 Another beer in the Restaurante Patio de Juderia, advertising a free Flamenco show which had long finished, was a complete rip-off 5.06€ for two beers, we'd just paid 11€ for two beers and three tapas. We didn't stay there long either, then having just stepped out of one doorway we had to go into another. 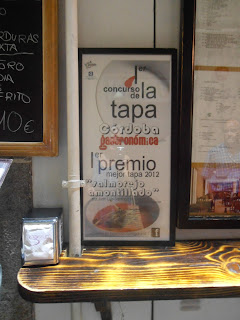 Right in front was Restaurante Garum 2.1 Bistronomic Tapas Bar the Montilla-Moriles Tapas winner and tapas with the most votes in the I Cordoba Tapas Gastronomic Competition offering the very same winning Salmorejo Amontillado. It had to be tried.

I know I've got my Rioja but hubby's tapa didn't appeal to me so where's mine? 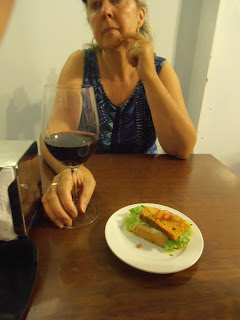 After the fairly normal earlier sampling it was a delight, a slight after taste of sherry and topped with thin chips of apple. 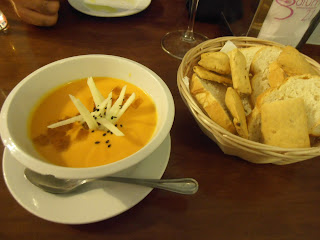 The bill? 7.10€ two tapas, a niiiice Rioja and a non-alcholic beer, a huge compensation after the previous watering-hole. Guess who wasn't driving, again!