Little did I think, when I finally harvested my grapes last September that, I would be drying orange peel now. It all started when my carefully grown grape vine cutting became my car port for shade and produced a bumper harvest. One of my larger, more vocal neighbours, Andrea, kept asking when I was going to pick the bunches of grapes and that she´d show me how to make wine or to bottle grape juice. 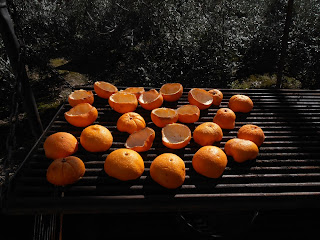 Fresh orange peel put out to dry
Excuse after excuse ran out, time was getting on so I finally had to pick them before they became raisins on the vine or wasp fodder. I drew the line at having to be pinned down to a day for her to come and help. I got all the relevant information, went to borrow her sack and rack, tasted some incredibly nice, rather potent (if a little hazy) wine she´d made the year before and went to leave with a smile on my face and a bottle under my arm and not even 11am.

"¿Of course you have some dried orange peel?" she called after me in broad Andaluz. Er, no, "¿Para que?" What for? That wasn´t mentioned in the many times repeated verbal instructions. Beckoned back in, I swapped a bemused grin and shoulder shrug with her hubby (who looked very content on the sofa in front of the TV) and waited to be laden again with wine making trappings in the form of dehydrated brown orange peel and advice on how much to use. 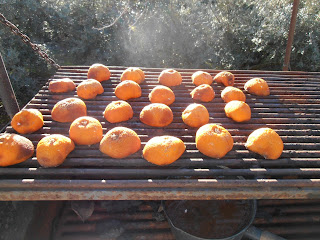 Drying orange peel, starting to brown
I harvested bucket after bucket of black grapes, cutting every visible bunch and some not so easy to spot or get. Then with the huge metal mincing machine on hubby´s workbench on the patio, Andrea´s sack to catch the juice on her rack to support the sack over a washing-up bowl (meticulously clean) on a metal patio chair we went to work. Milling and stripping (grapes from bunches). And milling and stripping and stripping and milling. Arms ached, back ached, tempers rose and buckets didn´t seem to empty.

Hubby, youngest son and I swapped jobs frequently and even Jesse our adopted mutt joined in by clearing up the dropped, squashed grapes of which there were plenty (she was an olive-grove urchin puppy who appreciates her food, carrots, broccoli, grapes whatever,) until finally the bottom of the buckets were in sight. 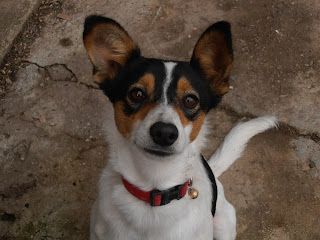 Food? Please? Now?
Grapes were milled, squashed, dripped and strained for hours, but it seemed longer, then transferred to large green bottles, a kilo of sugar per 15/20 litre bottle and that most important ingredient, dried brown orange peel added per instructions. Then the bottle topped off with a clean cloth secured with an elastic band (my invention, tie with a piece of string I was told, but I knew if I tied it, it would not stay on.)

Then the most important part of the whole process and the bit that encouraged me to have a go - "Put it in a dark cool place and do not move it until May. Then drink it." Now that is the bit I´m waiting for and depending on its outcome hangs the grape harvesting ordeal, or not for this year. And the very reason I´m drying orange peel for the first time ever.

And this is how it looks today, my first viewing, honest - hmmmm not really sure what to think. 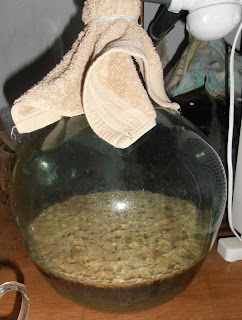 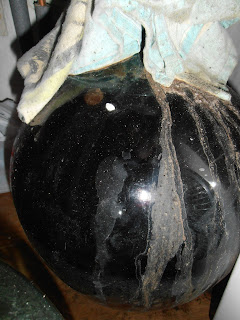 Certainly don´t fancy a drink - but it´s not May yet.