What To Do On a Weekend in Jaen

Jaen may not be as well known as her inland neighbours Cordoba or Seville or the other five coastal provinces in the region of Andalucía - Almeria, Cadiz, Granada Huelva and Malaga but it has many architectural delights and gems of its own which make it worthy of a visit. 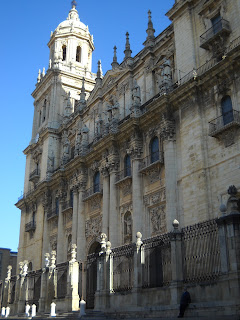 With a castle-hotel, UNESCO Arab Baths, municipal museum and huge Renaissance cathedral not to mention its liquid gold, the prized olive oil that the province is famous for and is at the base of its gastronomy, Jaen offers plenty to taste and discover.

It´s not only the Parador de Santa Catalina, a top ten voted best castle-hotel in Europe, that´s on the up, the cathedral is waiting for a decision as to whether it´ll be included along with Ubeda and Baeza as an UNESCO site.

Jaen is a small friendly and upcoming provincial city that will delight and surprise you at every turn. Away from the Parador you´ll be hard pressed to hear anything but Spanish spoken. 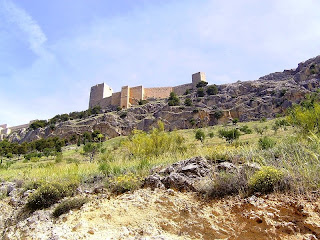 Start with a stroll along the top of this elongated hill overshadowed by dramatic granite peaks and on a clear day with a stunning view across the city and down to the Sierra Nevada mountain range in Granada.

The castle, hill and Parador are named after St. Catherine on whose saint´s day in 1246 the city of Jaen was taken from the Moors. A new fortress was built on the site of the ruined Moorish castle with the help of Moorish tradesmen from Granada. 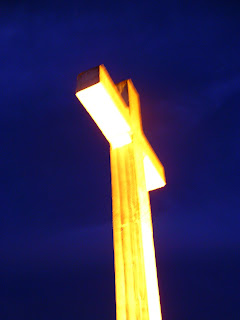 
Stand under the huge white monumental cross placed in remembrance of Catholic King Fernando lll who conquered the city and admire the city sprawl below. Follow the Moorish tile rooftops near the base of the hill to see the original city line that now expands outwards and is surrounded by olive groves that cover 77% of the province and make Jaen Spain´s leading producer of olive oil.

Between the Parador and the Cross the castle ruins now hosts an historical visitors centre, an ideal place to start your visit to Jaen and learn more about its history. Audio visual displays and cameras bring this small city´s past to life.

Before dining and just before dusk walk again to the cross and watch the whole cityscape come alive with twinkling lights as the darkness falls and romances the air. 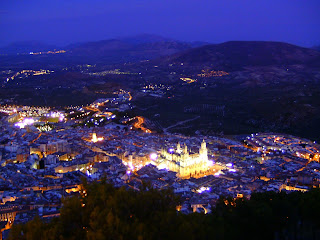 Jaen at night from the White Cross

The 4 *Parador de Santa Catalina is a must to dine in. Have tapas and a pre-dinner drink under the 20m high vauled ceiling of the drawing room. The thick fortress walls, wide-girthed doors, windows and tall backed chairs invite an atmosphere of regal awe. 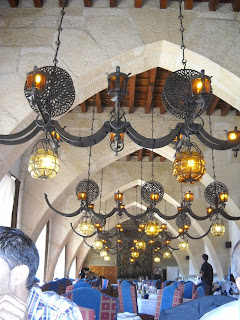 
The menu offers traditional dishes using olive oil, spinach, quail, all served with style in an unhurried manner in the Arabic style restaurant. Take coffee on one of the two tiny balconies with the city lights below.

Pop Down to Town or Feet Up on the Terrace

The more adventurous or less travel weary may like to drive down or get a taxi into the old part of town. Especially in the summer when the streets are crammed with tables and chairs and life takes place in the cool of the evening until the early hours.

If you´d rather put your feet up on your balcony order a bottle of something nice and drink in the view from your room and toast the mountain silhouette while planning tomorrow. 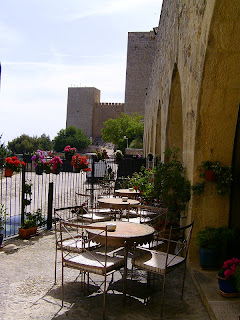 Terrace at the Jaen Parador

If you´re an early riser the breakfast buffet is served from 7-11am. It´s not cheap at around 18 euros but if you take it late, call it brunch and as the menu says eat as much as you like you´ll only need tapas for lunch.

If you´ve taken the brunch option then you might be in need of a walk, a 2 km downhill stroll to the city itself is just the thing. Follow the windy road down or cut through the pine trees to the main road. Turning left at the junction then wander into the car park on the right for what I think has to be the car park with the best view in Spain.

The Renaissance cathedral, masterpiece of Vandelvira, and one of Spain´s best Renaissance monuments appears in its mighty glory before you.

Head downhill through the car park and there is a pedestrian gate that brings you out into the heart of the old city, the Merced quarter where churches, plazas, monasteries and arches abound. Lose yourselves in these back street. You´ll never get too lost as the cathedral will always come into view as your next stop. 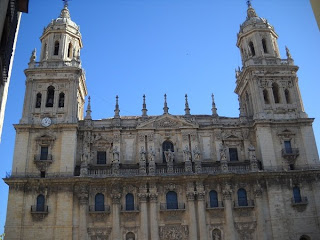 Like the locals it´s now beer and tapas time. Tapas are free and a little taster comes with every beer, wine or non-alcoholic drink you order, but not with coffee or spirits.

The choice is huge, no problem of wondering where to go. If you like the look of it and its busy it´ll be good. The most traditional bars are near San Ildefonso church and around the cathedral.
If you´d prefer a restaurant meal (after that breakfast?) then head towards the cathedral and check out Gambero on Avenida de los Escuderos. 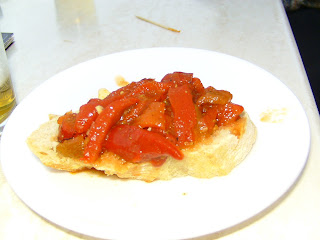 
A Spot of Culture

It´s time to visit the cathedral, take a stroll all around its footprint then head inside its ostentatious interior. It was begun on the site of a Mosque after the surrender of the Moors to King Ferdinand III. In 14th century Bishop Nicholas of Biedmar brought one of the cloths, St. Veronica´s veil, apparently used to wipe the sweat off the face of Jesus on Calvary and with an image of Christ imprinted on it, this can be seen in the Capilla Mayor. The church became a place of pilgrimage and in 1540 plans were drawn up for a larger place of worship.


Dinner on the Hill

Another good restaurant and one you can walk down to from the Parador is the Horno de Salvador, if you´re staying down in the city you might like to get a taxi up here.

The Arab Baths built in the 10th and 11th century are the biggest in Spain. There was a time they were lost. They were filled with rubble and the Palacio de Villardompardo was built above them, they weren´t rediscovered until 1913. Restoration work began soon after but due to civil unrest the restoration wasn´t completed until 1984 when they won the UNESCO Europa Nostra award for the restoration work. They are not in use for bathing as those in Granada and Cordoba. 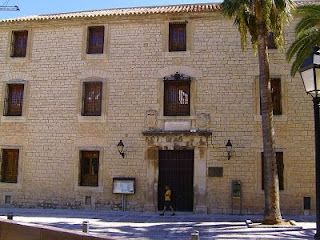 After the Baths head to Plaza Constitucion with its fountains and the keeping left walk downhill past the shops to the statue Plaza de las Batallas. Just a bit further on is the Provincial Museum with one of the world´s greatest displays of Iberian art on show.

Afterwards keep heading downhill to the new Boulevard Park, take a bench and admire the view of the hill of Santa Catalina and the white cross watching over you. 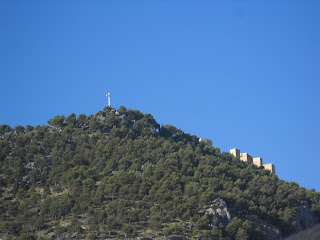 Jaen to Malaga by bus

Drive around the Embalse de Queibrajono