Festivals and Fiestas and Wine

Having squashed tomatoes thrown at me, smearing myself in grease or running with bulls aren´t my cup of tea but there is one fiesta that I would like to go to and it involves throwing and getting wet. It´s all about wine, not just any wine but it´s in my favourite wine producing region - La Rioja.

The Batalla de Vino or Wine Battle takes place on 29th June and has now been declared a fiesta of National Tourist Interest. Celebrated in Riscos de Bilibio next to the  Ermita de San Felices de Haro it´s part of the Fiestas de Haro. It´s origins, they say, comes from an age old conflict that the two neighbouring towns of Miranda de Ebro in Burgos and Haro in La Rioja had over the area of riscos de Bilibio, so they fought for it. 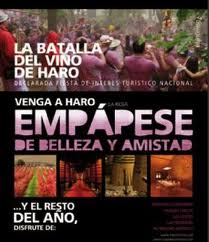 The area in question was a medieval castle with Roman remains and where the Reconquest supposedly began. The ermita (a small chapel) was built as a rememberance on the site.

To settle the dispute and to keep the area the townspeople must hang their town´s pendant as high as possible on the hill every year to prove their possession and if the ritual isn´t kept the area must pass over to the people of Miranda de Ebro.

After mass and breakfast in the chapel the battle can begin and thousands of litres of wine are thrown from various size and shaped vessels. Those taking part in the battle wear white and so as the battle progresses everybody and everything takes on a rosy tint.

After the battle, at midday, the ´survivors´ retreat to the Plaza de la Paz next to the Ayuntamiento de Haro and perform their traditional dances after which young bulls are run into the Plaza.

Now that´s one battle I wouldn´t mind taking part in. Here´s a link to a You Tube video if you´re thirsty for a glance.