Just a short distance, yet worlds-away from the mass tourism of Málaga´s Nerja coast, a hamlet in the mountain range and natural park of Sierra Tejeda, Almijara and Alhama once deserted, is born again.

A mule stop-over and trading post between the shepherds to the north  and the fishermen of the coast, breath has come again to Acebuchal. It´s access is still not much improved on the original mule track in the wilds of the mountains that border the provinces of Granada and Malaga.

Life in the mountain valley, as in all of rural Andalucia decades ago, was tough. The day began at first light with goat herds to be fed, crops to be watered, gathered and stored all day every day until dark. What they didn´t grow or preserve, except for when traders passed by, they did without.

The villagers produced their own lime to whitewash the houses and control the pests and made charcoal to barter and for their own use in the coming  harsh winters. 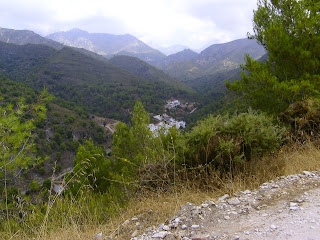 
In what used to be called Sierra de las Verdiales, the hamlet, under pressure from the constant battles of the resistance movement and the civil guard was abandoned in 1949 and became completely desolate.

A tumbling down collection of around thirty houses left to decay, visited at times by former residents, a life left behind in the modern world. Until one of the children forced to leave returned with the long-held dream to see life in the village once more.


Antonio and his wife Virtudes returned to El Acebuchal in 1998 and restored their first house. Electricity didn´t arrive in the village until 2003 and the roads were repaired in 2005 when mass was held for the celebration of village life, the first one in 50 years. 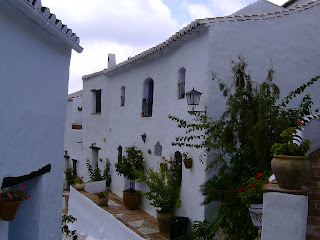 Today a thriving small community and a dozen casa rurales (holiday rental cottages) along with plenty of hard work and long hours has turned Acebuchal into a tourist destination with a difference. This a spot where you feel like the last civilization on earth surrounded by stunning mountains, deep ravines, trickling streams, a dense canopy of trees and a peace that quiets the soul.