The early morning orangey-purple hue silhouetted the mountains of varying shades of grey. Darkness slowly abated and the day before sunrise promised another blue Andalucían sky.

I was heading south to Güejar Sierra to check out a campsite and only on the road at that time of day as my son was off on a school trip to Seville and had to be at school by 6am. Not my favourite time of day.

So there I was on an explore-trip in the dark, becoming-light, a rare occurrence for a lover of lie-ins. But what a spectacular drive. The glistening snowy peaks of the Sierra Nevada Mountains rose as a backdrop and the sun began to rise casting an orange glow around.

By 7am it was light and by 8am the sunglasses were on, a necessity not pose and Güejar Sierra on the northern slopes of Sierra Nevada nearby.

These northern slopes are a less visited so pretty-much-non-touristy spot, but saying that there were plenty of Dutch cars at ny destination campsite. 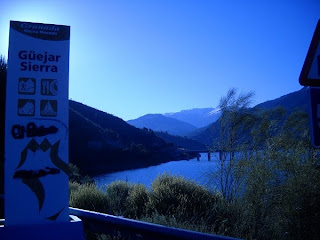 I had my eldest sons camera as the youngest had taken mine, as promised to Seville, and being me I didn´t bother with the settings ´cos mine is ok. His was on an obscure setting that I still don´t understand (and daren´t ask again) that´s why all my fotos are in sepia de blue.

That´s another way of saying useless, but they are what I have so here´s another one. 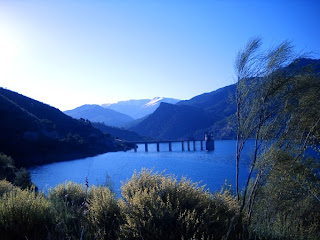 Shame the glistening white peaks of the Sierra Nevada don´t show, but they were pure shimmering white in the 8.30am light.