It was hubby´s birthday this week and being pretty grey and very cold we went into Martos, checked out the new bar/coffee shop, did the necessary chores and headed off into the olive groves in the Via Verde direction.

We were trying to remember (increasingly difficult these days) our cycle route with the boys, when the youngest was in a kiddy bike seat along the Via Verde de Aceite some years ago. How many? Well we don´t remember that, but as the youngest will be twelve this year, less than eleven but more than seven. 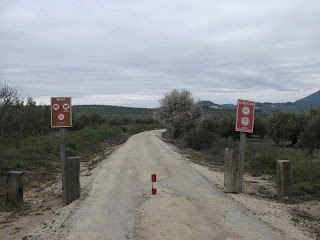 We think we crossed the point that we parked up and unloaded the bikes, but if we don´t remember who will? The older guys might, but we´d be lucky to get them there to ask the question.

We then found a spot we´d been taken on a picnic to with some Spanish friends, who´d have thought it was there? 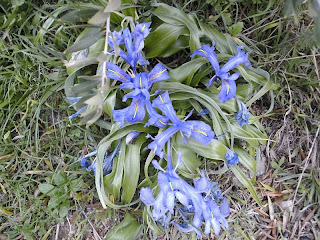 We then, in Hub´s ol´ work horse or to be precise right-hand drive, Spanish plated ancient Peugeot 405, took a wide ford and headed under the French-built metal and sleepered bridge that transported the trains carrying oil on the Via Verde, into olive groves. 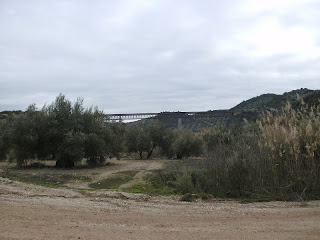 A couple of ahhhh´s later - we didn´t actually have to turn back, we crawled between olive trees, some picked other spreading black gold or shiny olives across the road.

Potholes, ruts and overhanging branches had us clock-watching (always a deadline) and wondering whether we´d come out ahead or have to turn around.

Not knowing where, when and why we´d hit civilisation, all sense of direction misled by thousands of olive trees and millions of olives, over mud tracks and once cemented tracks we hit a road. Still no sign of life but definately a civilised road, we´d hit the Martos to Las Casillas main drag.

A circular route, how exciting, I whipped out my notebook and scribbled illegibly, this, my first driving route around Jaén. Hire car companies will love us.

My optimism, dream and want is to compile enough walking routes and driving routes for a book/s, but I´m great at starting projects, not so good at finishing them.

I will write it up, check it again and add our route here for any adventurers into the infinity and beyond of Martos.
Email Post
Labels: drives andalucia driving route olive grove tour