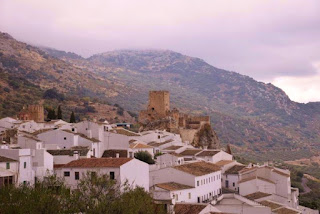 Zuheros, just over the border into Cordoba province from my home province Jaen , is now one of the 'official' pretty towns or villages. I have to agree, over the twenty years of living here I've seen it from the main road with the looming Subbetica mountains behind and explored its nooks and crannies many times, it is delightful.

If you plan your visit well you might taste some of the local delicacies in the September 'Cheese Fair'. The Cuevas de Murcielagos or Bat's Caves are a great descent underground and overground it is on the Via Verde de la Subbetica part of the network of 'Greenways' that are walking or cycling routes on what used to be the old train network to transport olive oil to the south.

Where to stay? My own rustic holiday home - Casa El Reguelo makes an ideal, quiet, country spot for exploring this lovely region, it's about 40 km from Zuheros, 30 mins from Jaen city and in the Sierra Sur de Jaen, Spain's main olive oil producer.

See the official website for more on Spain's Prettiest Villages