I love this time of year when the real heat has gone, the garden is looking sad but I´m getting the best harvest I´ve had all year of green peppers. They really don´t like the intense heat that we´ve had this year. Several heat waves whacking the temperature up to 45ºC made them (and me) struggle. Now they´re very happy and will go on producing until the first frost. 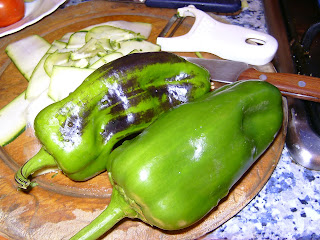 But what to do with them? I absolutely don´t eat them raw, unless in an English pub and they´ve been used in the salad or as a garnish. I don´t like them that way, (but if I´m paying for them I eat them!) I have never seen peppers served raw here in Spain where they are abundant throughout the year.

My personal (not for diets) way of eating them is fried in olive oil and made into a sandwich (brown bread of course, not nutritionaly the deficient white stuff, delicious though it can be) and butter (´fraid so) and wait for it - bacon. Actually I would use bacon if I was in the UK but here I use a delicious Lomo Adobado, slices like ham that are fried lightly - this is also delicious on lightly toasted bread topped with a fried quail egg. 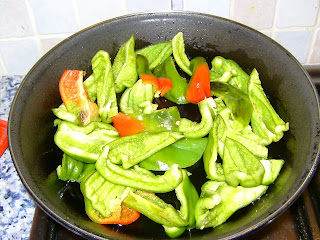 Green Peppers Frying in Olive Oil
Peppers actually take quite a long time to cook, like onions, they need a low heat and to be turned often, they also because of their shape need pressing down into the pan so all the pepper is in the oil. 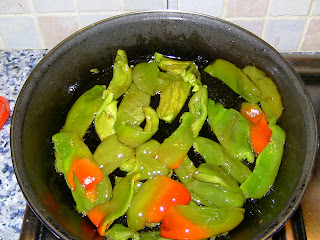 They begin to loose their shine and become dull and olive green instead of bright green when cooked. 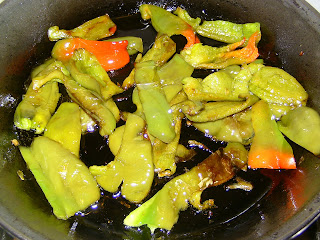 Soft and delicious they´re ready to eat - however you like them.