What to See in Granada - The Alhambra and The Albaicin


After visiting the Mirador de San Nicolas or going to the Albaicin for tapas or dinner and to enjoy the breathtaking views of The Alhambra & Sacromonte, I love the walk down the cobbled streets and alleys to the city below.

To trace my steps, take the street below the Mirador de San Nicolas, Aljibe de trillo. Aljibe is Spanish for a large water tank, called al-yibb by the Moors. The Albaicin is dotted with these cisterns which were built in the al-Andalus era, this one holds 50m3 of water.

Not so many years ago the aljibes supplied fresh water to local people. They were filled periodically with spring water so the residents could collect their supply, although the wealthy often had their own personal cistern. Continue along this street and bear left to the Placeta Carvajales. 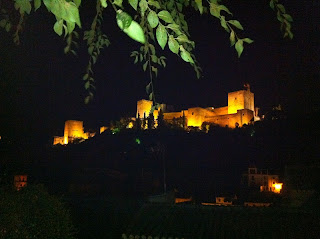 This pleasant square gives one of the best views of The Alhambra, during the day trees give shade from the scorching sun and at night there´s a beautiful floodlit image of the Palace on Al-Sabika hill. The square takes its name from an old Valencian family, the señores of Jódar, Don Alonso Sánchez de Carvajal y Don Juan de Carvajal who took part in the conquest of Granada.

After leaving the square continue downwards on the Cuesta de San Gregorio, the famous Flamenco singer Enrique Morente was born at No. 9 in 1942. He was considered to be a key player in the renovation of modern Flamenco music.

A little further on you will come across the Taberna del beso and the street of the Kiss or Calle del Beso in Spanish. This street was previously called Conde of Cabra after an Andalusian aristocrat who was a historically powerful figure.

The street´s name was changed in the 18th century due to a curious tale of a beautiful girl who lived there. There is now a plaque to illustrate this tale to all who pass by.

..... The girl was much loved in the neighbourhood due to her beauty and kind nature. One morning her mother went to wake her but found that she couldn´t, and was distraught at the loss of her child. That evening a funeral was arranged for the following day. In the funeral parlour just before the service, she went to see her daughter for the last time, as the lid was about to be put on the coffin lid, she kissed her daughter goodbye. At that moment the girl opened her eyes...

As you stroll down, on the left, you will see the church of San Gregorio Bético dating from the 16th – 18th centuries, this originated from a small hermitage which the catholic monarchs built as a burial site for many Christians during the Muslim rule.

Later, the outside of this church was used as an improvised market place where the farmers from the plains sold their produce and goat herders offered fresh milk for sale.

A little further down and Moroccan tea shops and colourful bazaars of Caldereria Vieja line the pavements. Now we´re in the city centre itself just a step away from the hustle and bustle of the Gran Via. 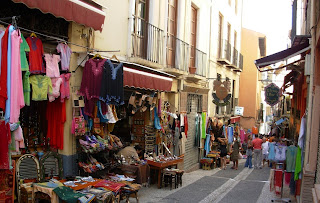 
Molly originally from Nottingham, moved to Spain in the 1990´s, she is in Granada, Andalucia.
Email Post
Labels: best Granada views best place Granada locals Granada The Albaicin The Albayzin The Alhambra walks in Granada what to see Granada what to visit Granada