The word Alcazar or Alcazaba, now Spanish, comes from the Arabic al quasar which means fortress or palace. The Alcazar was a fortified palace for Moorish rulers, often taken over and refurbished by Christian kings. The Alcazaba was a fortified area or a citadel.

Spain has some incredible Alcazars or castles, each very different but all inspired by Moorish architecture and often built on the sites of 13th century Moorish fortresses.

Alcazars were built by different Moorish kings who arrived from North Africa and began to occupy Spain from around 711 until thier final defeat and expulsion in 1492.

There are many other fortifications, castles etc. The following list is of those great architectural monuments whose title is Alcazar. 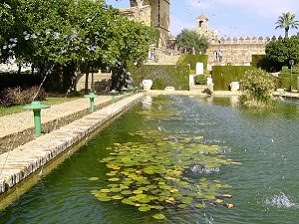 The Alcazars of Spain